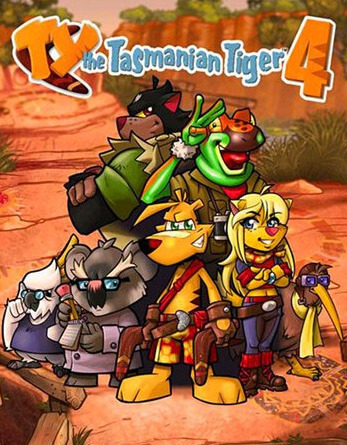 Ty the Tasmanian Tiger 4 retains various elements from previous games in the series, such as collecting opals and acquiring new boomerangs to use as weapons. The gameplay has shifted towards a 2-dimensional side-scroller style, very similar to the Game Boy Advance versions of the game's two prequels, with an adventure spanning over 40 levels. Unlike in previous games, the player gets to play as multiple characters from the Bush Rescue team, including Ty, Sly, Shazza and Dennis, as they travel through the various areas in Burramudgee.

After saving Southern Rivers from the plight of the Quinkan in the previous game, Ty and the Bush Rescue team have since regrouped and relocated their headquarters to the town of "Coolarangah" on the shores of Lake Burramudgee. Recently, Ty's old cassowary nemesis Boss Cass set up a resort island named "Cassablanca," which leads into a series of strange occurrences including a shadowy figure lurking around the town.