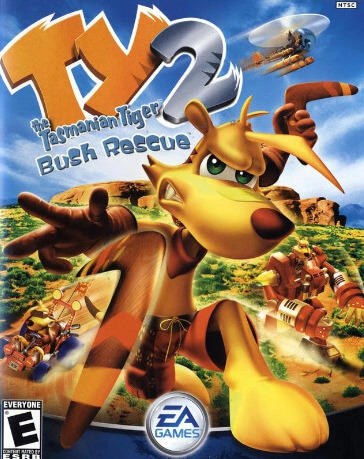 Ty the Tasmanian Tiger 2: Bush Rescue is a 3D platforming game developed by Krome Studios and published by EA Games for the GameCube, PlayStation 2 and Xbox systems, along with a 2D side-scrolling version of the game developed and released for the Game Boy Advance by Halfbrick. The game was remastered in high-definition for Microsoft Windows and was made available through Steam in 2017.

Bush Rescue is set in Southern Rivers, a rural countryside divided into many smaller areas, such as Bush Rescue HQ, the town of Burramudgee, and various other inhabited regions. Presented as a non-linear open world game, the player is given a degree of choice as to where to go and the order of what missions to accomplish While most of the gameplay is on foot, the player is occasionally given a selection of vehicles and weapons to control, which include trucks, mechanical body suits known as "Bunyips", mortar launchers and go-karts.

The game progresses by completing missions, which range from helping town citizens, delivering items from one point to another, destroying mission-critical objects and defeating certain enemies/bosses. After completing a handful of normal missions, the player is assigned a plot-critical mission, which progresses the game further and unlocks new areas upon completion. Ty's trademark weapons are his twin boomerangs, which can be thrown individually or together to defeat enemies, be used to perform a glide after jumping or falling, manipulate objects to create or clear pathways and utilize objects for maneuvers. Ty can also use a bite attack, which lunges himself at the nearest enemy, crate, or object with a large jaw chomp. It also allows him to reach hidden areas of objects by chaining bites together (Similar to the Homing Attack in Sonic games). New boomerangs can be purchased using Opals, the game's currency, at Sly's Boomerang Shop in Burramudgee, each with varying differences in combat effectiveness and functionality.

Multiplayer consists of Mario Kart–style go-kart racing, where players use various items to disrupt other racers as they compete to reach the finish line. The mode is playable split-screen with up to four players (two in the PS2 version).

While the story and overall gameplay remains the same as the console versions, the Game Boy Advance version plays as a 2D side-scrolling platformer as opposed to a fully 3D game. The game also is more restrictive, changing the open world vehicle exploration found in the console versions to an overworld map with enemies scattered throughout in real-time. Interacting with the enemies on the world map triggers a driving minigame where all enemies must be destroyed before being allowed to proceed, similar to Bionic Commando. Go-cart racing and all side quests associated with it were also completely removed, and no multiplayer modes are available in this version.

Following from where the previous game left off, the Tasmanian Tiger Ty manages to defeat his Cassowary nemesis Boss Cass using his father's Doomerang given to him by his reformed brother Sly, destroying Cass' Neo Fluffy X mech and retrieving the last missing talisman. After Ty returns the talisman to Rainbow Cliffs, his parents who were trapped in the alternate realm of "The Dreaming" during an earlier battle with Boss Cass return to the real world. Ty and his parents embrace and Rainbow Cliffs is saved. Boss Cass is later detained by police as a result of the incident.

Some time later, Cass' henchmen lead an spontaneous attack on the town of Currawong. Ty, his girlfriend Shazza the Dingo, Ranger Ken (a Tasmanian Devil) and Duke (a Kiwi) arrive to assist Maurie the Cockatoo, Sly and the local police in containing the situation. Together with Sly and Shazza, Ty manages to fight his way into the city and halt the advancing dropships and giant Deamon Fluffy mechs using his own bipedal Battle Bunyip power suit. Cass' henchwoman Fluffy (a Thorny Devil) arrives in her own Bunyip mech and makes her way towards Currawong Jail. Ty and Shazza realize that the attack on Currawong was a diversion so that Cass' henchmen could break him out of prison and Ty gives chase. Ty manages to catch up with Fluffy, and despite being supported by several genetically enhanced Frill Lizard henchmen, she is overpowered by Ty's Battle Bunyip. Ranger Ken and Duke arrive by helicopter to Ty's aid, but are subsequently shot down by Fluffy. Ty breaks off the fight to rescue his friends in the crashing helicopter, giving Fluffy the time to successfully break Boss Cass out of prison. After taunting Ty's efforts, Cass and Fluffy escape via a passing dropship. Frustrated by the turn of events, Ty vows to be ready for Cass when they meet again.

Two months later, Ty and his friends preside over a special inaugural ceremony, where Dennis (an Australian Green Tree Frog) announces the formation of "Bush Rescue", a peacekeeping organization based in Burramudgee dedicated to the protection of Southern Rivers. Ty and Shazza are then informed by Dennis that Boss Cass has founded his own country called "Cassopolis", and as a result of his status as leader now possesses diplomatic immunity. Waiting for an opportunity to recapture Cass, Ty and the rest of Bush Rescue go on a number of missions all around the Southern Rivers such as transporting valuable items, rescuing civilians and "saving" a filmmaking group from America who grow increasingly frustrated with Ty as he continually ruins their movie shoots by mistaking the actors playing ninjas as Cass' minions and attacking them (before Cass' minions actually do show up and attack the set). On one mission, Ty has a run-in with Fluffy who sends Patchy the Cybersaur (an Ankylosaurus with robotic enhancements on its head, tail, and back) to eliminate him. Later on while trying to stop a fire on an oil platform, Fluffy forces Ty to fight Buster (a giant robotic monster formed from hundreds of yellow nanobots joined together), which Ty also manages to defeat. During the battle, Fluffy manages to steal an interface device known as a Shadow Drive from the rig and delivers it to Boss Cass. Back in Cassopolis, Cass then uses the drive to power a device which combines the warm blood of a kidnapped Southern River koala worker with one of his Frill Lizard henchmen to create an "Uber Frill", the genetically modified bio-weapon first used to break him out of prison.