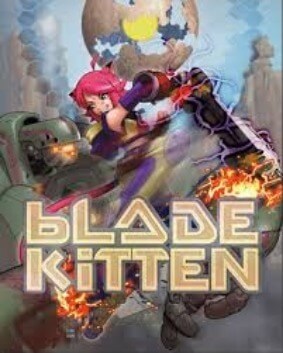 Blade Kitten is an episodic 2.5D platform game series developed by Krome Studios. It is based on the webcomic of the same name about a female half human, half cat bounty hunter named Kit Ballard. The game was released on Microsoft Windows, PlayStation 3 and Xbox 360 in September 2010, with Episode 2 released as DLC in March 2015 on Steam. It features a type of anime-style, cell shaded graphics.

Blade Kitten is a 2.5D platforming action adventure game set three years before the comic book series on an artificial alien planetoid known as Hollow Wish. The game begins with Kit tracking down a local troublemaker called Terra-Li but on her way to doing so, Kit uncovers a dark and evil secret about Hollow Wish and its inhabitants. Soon after arriving at the planetoid, Kit runs into fellow bounty hunter Justice Kreel who destroys her ship and steals her breaker key which contains all the information she needs to track down and capture Terra-Li. While the only playable character is Kit, the game does boast a large array of alternate costumes that change either Kits clothing or to a completely different person.

The game also includes Kit's alien sidekick Skiffy and her floating sword called a Darque Blade. She is able to swing her sword at close range or send it flying over a larger distance to attack enemies and hit inaccessible switches. While progressing through the game, the sword can be upgraded and changed to four different types of blade that can deal either higher amounts of damage, faster attack speed or auto lock-on. She can also ride dinosaur style animals called Noots over the plains of Hollow Wish.

The game features different types of collectible items that are picked up while progressing through the game or a hidden inside treasure chests which themselves are hidden somewhere in each level. These items act as both a score booster and the games currency, which can be used to buy upgrades like more health and stamina for Kit Ballard, costume changes and blade upgrades. The Krome Studios mascot, Ty the Tasmanian Tiger also makes an appearance as one of the unlockable costumes. The game consists of nineteen levels and three boss battles.

The game was first announced to the public via the Blade Kitten official websites blog in April 2009 and was created by Krome Studios Creative Director, Steve Stamatiadis who is also the creator and writer of the Blade Kitten comics series. Once he had finished working on Star Wars: The Force Unleashed, he returned to working on Blade Kitten, which had been a project he had wanted to do for some time. "Blade Kitten is a brain child of mine that originated as a comic series," said Stamatiadis. "Bringing Kit's anime-inspired universe to life is a milestone for us, and we're excited to open her world up to gamers."

Around four hundred eighty people auditioned for the voice roles of the game's seven of the main characters. The voice actress Kelly Fuller was chosen to be the voice of Kit Ballard. The game was showcased at many events, to help promote it during the run up to its release, such as the PAX Seattle and the Supanova Pop Culture Expo.

On May 22, 2014 Krome Studios announced they had obtained the rights for Blade Kitten back from Atari and were re-publishing the game.