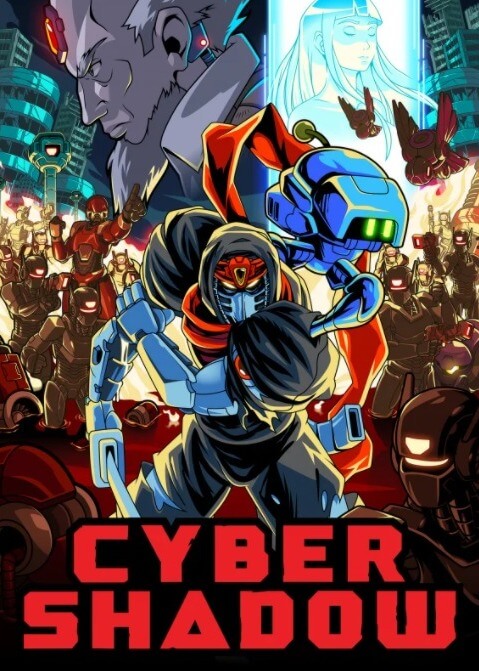 Cyber Shadow is a side-scrolling action-platform video game created by Finnish indie developer Mechanical Head Studios and published by Yacht Club Games. Featuring an 8-bit aesthetic, it follows a cybernetic ninja named Shadow who sets out to rescue his clan in a world overrun by machines.

The game is being mostly developed by Aarne Hunziker, who is the sole member of Mechanical Head Studios. It was first shown at PAX East 2019, having been in development from years before and silently announced before that event. It contains stated inspirations from other platform video games such as Ninja Gaiden.

Cyber Shadow is a side-scrolling platforming game in which players control a ninja character who battles enemies with a sword and various special abilities acquired as subweapons. It features an 8-bit aesthetic which shares similarities to Shatterhand and contains several gameplay elements of Shadow of the Ninja, Ninja Gaiden, Mega Man, Castlevania and similar games, which include snaking paths and occasional backtracking. Several bosses are present.

The game's story is told primarily through cinematic cutscenes, though in-engine ones are used as well.

The game's plot follows Shadow, a cyborg ninja who sets out to rescue his fallen clan in a world overrun by synthetic lifeforms harvesting them for their powers. It is specifically set in the ruins of the fictional Mekacity.

Cyber Shadow is being developed by Mechanical Head Studios, a team consisting purely of the creator Aarne Hunziker, and published by Yacht Club Games.

Aarne Hunziker, having already been developing the game for years on his own, initially had no intention of teaming up with a publisher; he was first discovered by Yacht Club while posting about the ongoing development on Twitter, and later was convinced by them to "join their little family".

Although most of the development is handled by Hunziker, the music will be composed by Enrique Martin and produced by Jake Kaufman; in addition to their usual role as a publisher, Yacht Club is giving design feedback from their previous experience developing Shovel Knight.

Hunziker's first experience in game development was hacking the ROMs of classic games to manipulate their visuals, effectively customizing them. He later decided to create his own game, but scrapped it.

Four years later he began coding from scratch what would become Cyber Shadow. He has had continued difficulties with the development of the game due to its scope and having to do it almost entirely alone.

Hunziker has described the game as one that combines "the level design principles of Mario, the skills and action of Ninja Gaiden, the enemy designs of Contra and the dark visual aesthetic of Batman", but has also said that it is more deliberately intended as a callback to Shadow of the Ninja.

In an interview with Siliconera, he said that "the story is about exploiting carefully nurtured ancient knowledge with logic" as a reason why it involves both ancient ninjas and futuristic robots.

The game was first shown at PAX East 2019, though it was announced less publicly earlier.

All versions of Cyber Shadow have received "generally favorable reviews", according to review aggregator Metacritic.