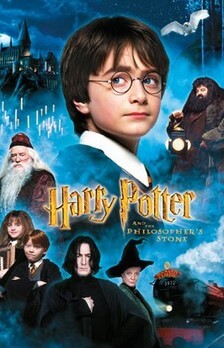 Harry Potter and the Philosopher's (Sorcerer's in the U.S.) Stone is an action-adventure video game with platform elements published by Electronic Arts. It is based on J.K Rowling's novel of the same name and the film adaptation. Philosopher's Stone was initially developed for the Game Boy Advance, Game Boy Color, Microsoft Windows and PlayStation in November 2001, and was re-made two years later for the GameCube, PlayStation 2 and Xbox in December 2003.

The story follows protagonist Harry Potter, who, after discovering he is a wizard, is sent to Hogwarts School of Witchcraft and Wizardry where he makes friends and receives magical training, and along with his friends stop Lord Voldemort from returning to power. The game received mixed reviews. Critics commented on the game's accessible gameplay and its unimpressive graphics (2003 versions) while others said the game's license would be the only thing to draw in fans.

In the Microsoft Windows and Macintosh versions, the game is played like a third-person action and puzzle game. The story follows a linear progression, separated into levels with a specific end goal. Spells are learned progressively via lesson levels, and unlock increasingly complex puzzles. The spells featured are as follows: The Flipendo Jinx, which can be used to stun enemies and push objects around; The Alohomora Charm, which unlocks doors and chests; Wingardium Leviosa, which can levitate objects; Lumos, which causes platforms of light to appear; Incendio, which can disable aggressive plants. The storyline follows Harry through the main elements of the book's plot, including rescuing Hagrid's dragon Norbert, advancing through the various protections around the Sorcerer's Stone, and eventually defeating Lord Voldemort. There are also several levels in which Harry can fly on a broomstick and play Quidditch - this gameplay can also be independently accessed through the start menu.

Like the Windows version, the game is a third-person action adventure game. However, the story is arranged in a completely different fashion to the PC version, and features different story events and gameplay. It was developed in the UK by Argonaut.

The Game Boy Color game is a role-playing game, similar to games like Final Fantasy. The player controls Harry, starting from when Hagrid brings him to Diagon Alley. It does not follow the story of the books, with all the scenes from that point on in the book being playable, except for the addition of bands of monsters such as rats, bats, and spiders roaming most of the locations. The spells are used for combat, rather than interacting with the environment.

A new game of Harry Potter and the Philosopher's Stone was made for newer consoles in 2003 by Warthog Games, 2 years after the original versions. Its gameplay differed greatly from the other versions, followed the film far more closely than the other games, and was criticised for taking all the spells and world map from the Chamber of Secrets version of the game.

All games from the serie "Harry Potter"

(6) Comments on "Harry Potter and the Philosopher's Stone Full Version"