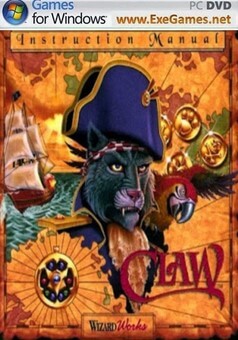 Claw is a 2D side-scroller platform video game published by Monolith Productions in 1997 about an anthropomorphic pirate cat who sets on a quest to find an ancient amulet while fighting enemies and solving puzzles. It is Monolith's second release after Blood, which was released that same year in May.

A famous cat pirate, Captain Nathaniel Joseph Claw, is imprisoned by the Cocker-Spaniards (a dog species, a pun on Cocker Spaniel) after they attack and sink his ship. In the prison cell, waiting for his execution, he finds a note and a piece of a map hidden in the wall. The note tells of the Amulet of Nine Lives—a mystical artifact that grants its wearer near-immortality. Breaking out of his cell, Claw sets out to collect all 9 gems of the amulet and retrieve it for himself.

The game begins with Claw outside his cell. As he progresses through the prison, he eventually gets to the outer wall and escapes to the forest after defeating the warden, Le Rauxe. In the forest, he encounters a gang of thieves, headed by his former love interest, Katherine. He manages to defeat them and finds his way out of the forest, and into the nearby port town of El Puerto del Lobo, where he is hunted down by the magistrate, Wolvington, and the city guards.

After running through the city, escaping the guards, and defeating Wolvington himself, the Captain stumbles into a bar and overhears a conversation between two of the crew of Captain Red Tail, a lion who is Claw's arch enemy. He learns that Red Tail is looking for the gems of the amulet as well, and that Red Tail's first mate, Gabriel, has one of them in his possession. He also hears that Red Tail might have more himself.

Claw quickly makes his way through the port and jumps on Red Tail's ship, where he defeats the seamen (Gabriel among them) and hides in the ship until it sets port near the Pirate's Cove. Claw goes through the rickety wooden structures of the pirate cove, defeating the pirates and their leader, Marrow, Claw's former friend. Claw descends into the caves, where he discovers his old crew, presumed dead after the attack on his ship.

The crew informs Claw that they were given three gems by a merchant in the tavern, but were forced to give two of them to Red Tail; they managed to keep the third as Red Tail believed there were only two in their possession. The crew then reveals that Red Tail has set sail for Tiger Island, a legendary place most doubted even existed, including Claw. Claw takes the crew's gem as well as a piece of the map, which shows a path to Tiger Island through the labyrinth of underwater caverns. The crew offers to accompany him through the caves to Tiger Island, but Claw insists on going alone, telling his crew to acquire a ship and meet him there.

The Captain takes the shortcut through the caverns, where he fights through a race of merpeople, who fight him in order to defend their king: a giant frog-like creature called Aquatis. Claw manages to defeat Aquatis with explosives.

Claw resurfaces to face Red Tail and his crew on Tiger Island. Claw manages to bring Red Tail down and acquire the final two gems, yet Red Tail escapes. Claw enters the Tiger Temple at the heart of the island to claim the amulet. There he fights the highly trained tiger guards, avoids the many death traps in the lava-filled temple, and defeats Omar, the captain of the tiger guard, who holds the final gem.

Claw places the gems on a pedestal. They rearrange themselves and the ghost of a princess comes and gives him the amulet, granting him 9 lives, after summarizing his adventure. Omar is sworn to defend to the holder of the Amulet, thus becoming Claw's bodyguard. The final scene shows him leaving on his ship with the amulet, Omar, and his crew.