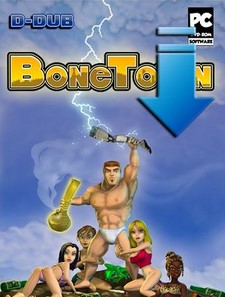 BoneTown is an adult action-adventure video game developed and published by American studio D-Dub Software, released for Microsoft Windows on November 12, 2008. The game follows the player as he completes missions and has sex with various women.

BoneTown is an adult video game, in that it is sexually explicit in nature. The premise of the game is that as the player completes more missions, his testicles become larger; the player is able to have sex with more attractive women as they become thinner.

The character wakes up to a fraternity brother urinating onto the player's face; the game then begins with a tutorial explaining how to beat up the brother. A blond woman explains to the player that the point of the game is to have sex with as many women as possible, and then performs fellatio on the player character. After finishing, a man in a suit approaches and explains that he is part of an organization called "The Man". He warns the player that public indecency is illegal and if the player is caught, he will be arrested. The player goes through the game completing missions for various individuals in a style reminiscent of the Grand Theft Auto video games; missions include participating in pornographic films and beating up someone who believes they are Jesus.

The player explores the game's locale, Bonetown, and its various neighborhoods which are sexual puns, such as "Missionary Beach". Women are scattered throughout the city, and the player is able to have sex with any of them; sex can either be for the player's enjoyment, or to recover in-game health, depending on the positions selected. The game requires the player to match the desires of the woman in order to last as long as possible. Temporary power-ups are given through recreational drug use.

BoneTown was developed by Albuquerque-based D-Dub Software, which was founded in 2004 by recent college graduates Hod and JB. Hod stated that they set out to make a game which featured gratuitous sex and drug use but contained no violence; although the game contains weapons and fighting, there is no blood and people are only knocked out, not killed. He called Comedy Central's South Park "our number one influence" for the humor in the game. The company set out to create a new industry and marketing model for adult games as most retailers refuse to sell Adult Only rated games by the ESRB. BoneTown was self-released by D-Dub on November 12, 2008.