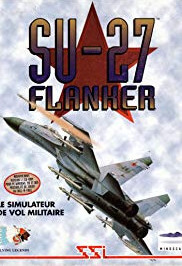 Su-27 Flanker is a combat flight simulator released for the PC (DOS and Microsoft Windows) in 1995 on CD. Developed in Russia by Eagle Dynamics and published by SSI, the game takes part in Crimea and allows players to fly the SU-27 aircraft in various combat roles. The game also includes a mission editor, allowing the player to create custom gameplay scenarios.

The Windows 95 version was released first, with the DOS version being developed later.

Lock On: Modern Air Combat: Although not technically a sequel, it is regarded by many to be. This version includes both Russian and American aircraft.

Reviewing the Windows 95 version, a Next Generation critic summarized the game as being "designed for realism over ease of use." He noted that the notations in the cockpit are in Russian, and that the game has no introduction of any sort when it boots up, instead simply presenting a long list of files with undescriptive names, leaving the player with no idea of where to start. He concluded that serious flight sim enthusiasts should consider getting the game for its "unsurpassed" realistic modeling of the Su-27, but that anyone else would be completely lost. He scored it two out of five stars.

Su-27 Flanker was a runner-up for Computer Gaming World's 1995 "Simulation of the Year" award, which ultimately went to EF2000. The editors wrote that Su-27 Flanker features "an astonishing variety of allies and targets in the air and on the ground, as well as extremely challenging computer pilot AI."

PC Gamer US nominated Flanker 2.0 for its 1999 "Best Simulation" award, but it lost to MiG Alley. The editors wrote that Flanker 2.0 is "not everyone's cup of tea, and even veteran simmers find it a challenge to master every vagary of the Su-27. But for sheer authenticity, it can't be topped."