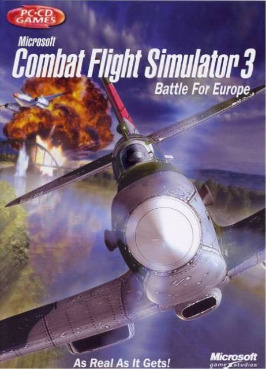 The game is more or less a heavily updated version of the first (Microsoft Combat Flight Simulator), offering a far wider range of options to the player. The game incorporates an active campaign mode, whereby the player may play for the USAAF, RAF or Luftwaffe in a campaign starting in March 1943. Based on the player's performance in the North-west Europe, which spans from northernmost England to eastern Berlin, the player can alter the length and even outcome of the war. By avoiding the aviational errors of the Luftwaffe made in the past, and by targeting key targets in British production centres, it is even possible for the Germans to drive the allies back to London and force their surrender. It is also possible for the Allies to make a landing in Fortress Europe prior to the 6/6/44, or D-day. The multiplayer game allows players to occupy different stations on the same vehicle.

Combat Flight Simulator 3 was a nominee for The Electric Playground's 2002 "Best Simulation for PC" award, but lost to MechWarrior 4: Mercenaries.