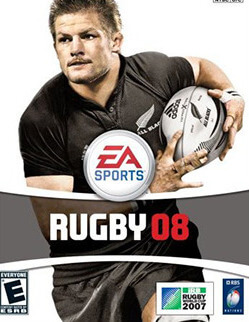 Rugby 08 is the last release in the Rugby series by EA Sports. The game allows players to play as many Rugby nations, both major and minor, and includes many tournaments, such as the Rugby World Cup, Tri Nations, Six Nations, Guinness Premiership and Super 14.

Rugby 08 was released prior to the 2007 World Cup in France. New modes include the Rugby World Cup and the World Cup Challenge mode. Other new gameplay features include simplified lineouts and defensive formations.

The international cover features Richie McCaw. Other players are featured in specific markets:

The commentary is provided by Ian Robertson and former All Blacks great Grant Fox.

The game received "mixed or average reviews" on both platforms according to the review aggregation website Metacritic. In Japan, Famitsu gave the PlayStation 2 version a score of one four, two sixes, and one five for a total of 21 out of 40.