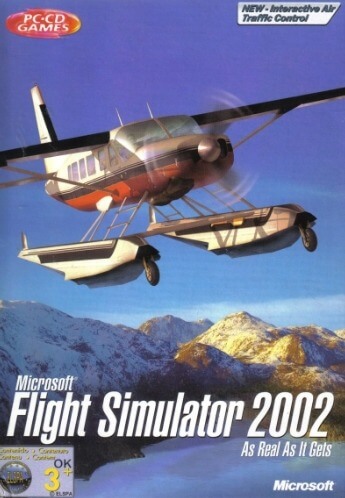 FS2002 (8.0) improved vastly over previous versions. In addition to improved graphics, FS2002 introduced air traffic control (ATC) and artificial intelligence (AI) aircraft enabling users to fly alongside computer controlled aircraft and communicate with airports. An option for a target framerate was added, enabling a cap on the framerate to reduce stutter while performing texture loading and other maintenance tasks. In addition, aircraft feature a 3D virtual cockpit, creating in effect a view of the cockpit from the viewpoint of a real pilot. The external view also featured an inertia effect, inducing an illusion of movement in a realistic physical environment. The simulation runs smoother than Flight Simulator 2000, even on comparable hardware. A free copy of Fighter Ace 2 was also included with the software.

Anticipation was high for this version, because of its interactive AI traffic, ATC features, and its release on September 11, 2001. Due to the September 11 attacks, the launch was postponed to remove the twin towers of the World Trade Center in all copies, and the release date was pushed back to 19 October 2001.

In the United States, Flight Simulator 2002 debuted at #12 on NPD Intelect's computer game sales rankings for October 2001, at an average retail price of $70. It was absent from the top 20 by November. By the end of 2001, the game's domestic sales totaled 130,954 units, for revenues of $9 million. Internationally, the game received a "Silver" sales award from the Entertainment and Leisure Software Publishers Association (ELSPA), indicating sales of at least 100,000 copies in the United Kingdom.

Flight Simulator 2002 won PC Gamer US's 2001 "Best Simulation" and the Academy of Interactive Arts & Sciences "Computer Simulation Game of the Year" awards. The former publication's editors wrote that the game "narrowly prevailed" against IL-2 Sturmovik, and commented that its winning despite having no "guns, missiles or explosive pyrotechnic effects of any kind is remarkable testimony of the bleeding-edge quality of Microsoft's benchmark product." Computer Games Magazine, The Electric Playground and Computer Gaming World all nominated Flight Simulator 2002 as the top simulation of 2001, but these awards went instead to IL-2 Sturmovik. Computer Gaming World's editors called Flight Simulator 2002 "an excellent iteration of the esteemed series," and a game that "took on the daunting task of increasing the detail level of the entire world at least a hundredfold."