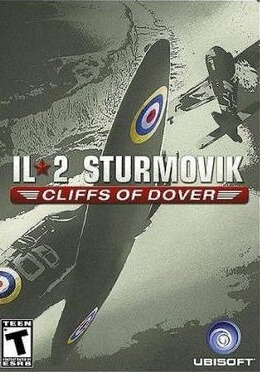 IL-2 Sturmovik: Cliffs of Dover is a World War II combat flight simulator representing the Battle of Britain, formerly developed by the Russian software house 1C:Maddox Games, and in current development by Team Fusion Simulations. It inherits the name IL-2 Sturmovik from the Il-2 Sturmovik classical series (2001-2009) and is considered as being a part of the series, but it runs its own game engine instead of sharing it with the classic series.

During development the game was originally called Storm of War: Battle of Britain and scheduled as a November 2006 release. In January 2011 Ubisoft revealed the current name for the game and release date of 31 March 2011. Upon Russian and EU release, the developers acknowledged a number of serious bugs and performance issues. These were somewhat corrected via patches from 1C Maddox.

In October 2012, it was revealed on the 1C forums that development had fallen short of the original goals and that 1C Maddox was unwilling to continue supporting the title. Cliffs of Dover was planned to be supplemented by a new theater, Moscow, but 1C chose not to continue development with the game engine, instead incorporating a similar, Russian, theatre into the next title in the series with a new game engine, IL-2 Sturmovik: Battle of Stalingrad. This game is developed by 1C Company and 777 Studios, which is the developer of the WWI flight simulator Rise of Flight: The First Great Air War.

Shortly after the announcement of official development ceasing for Cliffs Of Dover, a community modding team known as Team Fusion further stabilized and enhanced the game by community patches.

On 21 December 2016, it was announced that 1C Game Studios had come to an agreement with the re-named Team Fusion Simulations to cooperate on future releases of Cliffs of Dover, and grant them access to the game's source code. The first official Team Fusion Simulations addon, IL-2 Sturmovik: Cliffs of Dover - Blitz Edition, was released in December 2017. A North Africa expansion module is currently in development with a likely release in 2019.

The game features 12 flyable aircraft with variants and about 25 total aircraft including AI controlled planes upon release, including such iconic aircraft such as the Supermarine Spitfire Mk I, the Hawker Hurricane Mk I, the Messerschmitt Bf. 109E, and the Junkers Ju 87B "Stuka". Cliffs of Dover is known for its complex and detailed damage modelling system, which models the aircraft's airframe, engine, cooling systems, control systems and more, and accurately applies damage to the correct part of the correct system when hit by a bullet. The cockpits in the game are fully modelled in 3D, and many of the switches can be operated with the mouse.

The game features singleplayer mode, which can be played in campaigns, single missions, or user-created missions made with the in-game mission editor. It also features a multiplayer mode that can support up to 128 players as well as AI controlled aircraft. It is also possible to play in a co-op mode.

The game was met with very mixed reception upon release, as GameRankings gave it a score of 51.40%, while Metacritic gave it 60 out of 100.

The preliminary critical Metacritic rating for the Blitz Edition release is 70 out of 100.