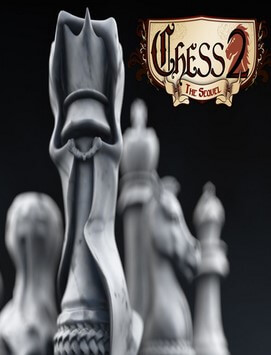 Chess 2: The Sequel is a chess variant created by David Sirlin and Zachary Burns of Ludeme Games. Sirlin, whose previous design work includes rebalancing Super Street Fighter II Turbo HD Remix, approached the problem of rote endgames and static opening games in chess by introducing asymmetrical piece compositions and an additional win condition. A video game version of Chess 2 is available on Ouya as of 2014. The game was released on Steam on 19 August 2014.

When designing Chess 2, Sirlin took inspiration from Bobby Fischer's Chess960 variant. Like Fischer, his goals were to create a more dynamic opening game, decrease the emphasis on openings memorization, and reduce draws. In Chess 2, players may choose from six unique armies, such as an army with two kings and an army whose knights, bishops, and rooks may move like each other when adjacent.

A new win condition has been added: a player wins if their king travels past the fourth rank. This was intended to prevent traditional "solved" chess endgames, which can be played by consulting a chess tablebase, and therefore does not require player skill.

A third rule change from standard chess is the dueling system. Each player begins the game with three stones. Whenever a capture is made, the defending player may initiate a "duel." In a duel, the players secretly "bid" up to two stones. After revealing the bids, the stones are removed from the game; if the defender spent more stones than the attacker, both the attacking and defending pieces are captured. More stones may be earned by capturing enemy pawns. Sirlin's intention with this mechanic was to allow players to dynamically evaluate the worth of their pieces throughout the match.

A video game version of Chess 2 was released on Ouya in December 2013. The game debuted on Valve's digital distribution platform Steam in 2014. In June 2014 the game's servers were temporarily shut down after an ex parte court order issued to Microsoft to seize the domains of DNS service No-IP in order to control botnets that had abused its services.