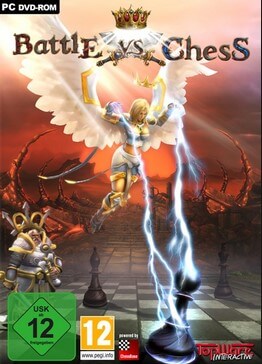 Battle vs. Chess is a computer simulation game of chess developed by Targem Games and Zuxxez Entertainment and published by TopWare Interactive. It was released on May 17, 2011 for PC (Windows and Mac), PlayStation 3, PlayStation Portable, Nintendo DS, Xbox 360 and Wii in Europe.

The game was not initially released in the United States because of a lawsuit by Interplay Entertainment for trademark infringement due to its similarity to their title Battle Chess. The case went to trial by jury in the summer of 2012. The District Court of Californiaclarification needed came into session and given that after two years of litigation, TopWare Interactive discharged their lawyer, resulting in Interplay winning the case by default. The settlement was agreed upon on November 15, 2012. Terms of the settlement were $200,000 plus interest. After the lawsuit, the game was renamed Check vs. Mate to avoid the Interplay trademark and was finally released in North America through digital distribution networks including Steam.

Battle vs. Chess uses Chessbase's Fritz 10 engines to make it moves. It has no way of setting time controls though, and on the highest level 9 can take half a day to make a single move.