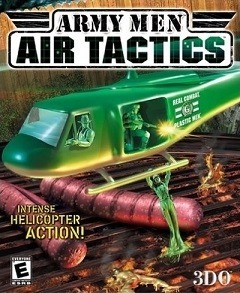 Army Men: Air Tactics is a real-time tactics video game developed and published by The 3DO Company exclusively for Microsoft Windows. Air Tactics is a helicopter game using the Army Men 2 engine.

This time the player character was Captain William Blade of the Green Airborne Cavalry. This was a top-down flight sim that placed the player in a number of different helicopters. Captain Blade's main responsibilities is to act as aerial support for Sarge Hawk and his men. This game introduced abilities such as lifting heavy objects and transporting them to other locations, landing on the ground to load/unload soldiers and unique airborne combat not seen in other games. This game contained a number of mini games such as playing air-hockey versus a Tan helicopter, as well as a number of static games.

The game was met with mixed reception upon release, as GameRankings gave it a score of 57.44%.