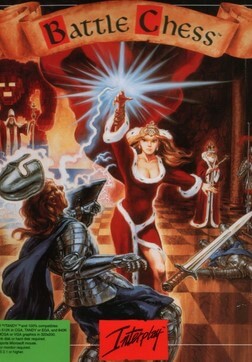 Battle Chess is a computer game version of chess in which the chess pieces come to life and battle one another when capturing. It was originally developed and released by Interplay Entertainment for the Amiga in 1988 and subsequently on many other systems, including 3DO Interactive Multiplayer, Acorn Archimedes, Amiga CD32, Amiga CDTV, Apple IIGS, Apple IIe, Atari ST, Commodore 64, MS-DOS, FM Towns, NES, Mac OS, NEC PC-9801, X68000 and Microsoft Windows. In 1991, Battle Chess Enhanced was released by Interplay for the PC, featuring improved VGA graphics and a symphonic musical score that played from the CD-ROM.

Battle Chess was critically acclaimed and commercially successful, resulting in two official follow-ups as well as several inspired games. Its remake, Battle Chess: Game of Kings, was released on Steam on March 16, 2014.

Battle Chess follows the same rules as traditional chess; the battles always play out so that the capturing piece defeats its target. Since there are six types of pieces for each color, and a king cannot capture a king, there are 35 battle animations. The rook, for example, turns into a rock monster and kills a pawn by smashing his head. There are some pop-culture homages; the knight versus knight animation references the black knight fight in Monty Python and the Holy Grail , and the king versus bishop fight pastiches the short battle between Indiana Jones and a swordsman in Raiders of the Lost Ark.

The game can be also played in a 2D version with no animations, and the Amiga CDTV version features a fully voiced introduction describing the movements of the pieces for the benefit of beginners. Digitized sound is utilized in the DOS version for all battle sound effects and is played through the PC speaker, without the need for a sound card, using a technique akin to RealSound.

Battle Chess could be played against a human opponent (by hotseat, or by null modem or over a local area network in some ports) or against the computer's artificial intelligence (AI). The game has an opening library from over 30,000 moves (which were not available for the Commodore 64 and Apple II versions).

Battle Chess was the first title developed and published by Interplay Entertainment themselves after ending their relationship with Electronic Arts, besides Neuromancer. The game was featured in the 1992 film Knight Moves about a chess grandmaster who is accused of several murders. Battle Chess producer and Interplay's founder Brian Fargo expressed his fondness for the game in a 2006 interview, although he added that he did not think there would be much of an audience for it today.

An apocryphal story of the development was the invention of "The Duck" (an example of Parkinson's law of triviality): The producers of the game were known to demand changes to the game, presumably to make their mark on the finished product. To this end, one animator added a small duck around the queen piece, but made sure that the sprite would be easily removable. Come review, the producers, predictably, okayed everything but asked for the duck to be removed.