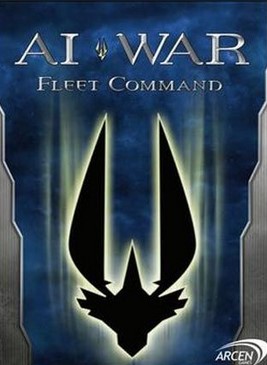 
AI War: Fleet Command is a real time strategy computer game created by independent developer Arcen Games. The game was first released on the Arcen Games website and Impulse on June 2, 2009, before getting a Steam release on October 16, 2009 that coincided with the release of version 2.0. AI War blends the 4X, tower defense, and traditional RTS genre to create something that was hailed as unique but with a steep learning curve. Players go up against two artificial intelligence (AI) opponents that are superior to the player. The objective is to destroy the home planets of both AI opponents.

AI War was lauded by reviewers for being a fresh take on the RTS genre and bringing something new to the table, but criticized for its learning curve and lackluster graphics. It was also noted that the AI represented a significant challenge and reacted to the actions of the player. An expansion titled The Zenith Remnant was released on January 12, 201 that adds new factions, AI types, ships and new gameplay mechanics. As of October 27, 2010, a micro-expansion named Children of Neinzul was released, with the sole intention of donating all profits from game sales to Child's Play, a charity for sick children. Another full expansion was released in January 28, 2011 titled Light of the Spire, which added new content and game modes. On October 19, 2012, AI War 6.0 was released along with the Ancient Shadows expansion. A sequel, AI War 2, was released to "early access" on Steam on October 15, 2018.

AI War pits human players against AI opponents that control vastly superior fleets at the start of the game. The main goal is to destroy the two opposing AI's home command stations without losing yours (in multiplayer the humans will not lose until all human home command stations have been lost). As with chess, AI War is generally thought of in the three stages of opening, middlegame, and endgame, all of which involve different player and AI interactions and activities.

Maps vary in size from 10–120 systems and map size has a significant impact on the play style of the game as well as time required. The game starts out with the human player(s) each controlling one system (though they may choose to start with more) and the AI controlling the rest of the map. The AI operates using something called AI Progress. This mechanic works as an indicator of how aware the AI is of the leftover human remnants in the galaxy (as well as to balance the fact that if the AI simply attacked the player with everything it had at the start of the game it would win every time). As players complete objectives and capture systems, this value goes up, increasing the volume of reinforcements and attack forces the AI gets to use. There are a few mechanics such as Data Centers and the newly introduced AI Superterminals that lower the AI Progress. One of the primary factors when considering whether to take a planet is the AI progress; taking planets raises it and taking too many will cause the player to be overrun.

AI War supports dynamic cooperation where up to eight players can play together and drop in and out of the game at any time. One effect of this is a group game between friends does not require everybody to be around for each game session, nor does the lobby have to be remade to continue playing if another shows up. As of 3.0, players who join mid-game are given a special colony ship that allows them to start playing without leaning on the other players to gift them systems/units as much.

AI War uses strong disincentives to micromanage units in order to help players manage such a large empire without getting bogged down in details, being more important to choose planets wisely and balance forces than to control said forces exact behavior. AI War instead chooses to be more of a grand strategy game, putting more focus into critical thinking and proper decision making than into "clicking fast".

AI War received generally favorable reviews and achieved an overall score of 80 on Metacritic. Some reviewers have criticized AI War for being too complex with too steep a learning curve, which contributed to it not being nominated for a 2009 Independent Games Festival award.

AI War's more positive reviews said "AI War is a revolution in terms of how RTSs play," "The first three AI War Expansions are perfect examples of what an expansion should be," and "AI War breaks most of the genre's rules. Which is precisely why it's incredible." These same reviewers also noted "it’s got a considerable learning curve," "The one thing the first three expansions have in common, however, is how much they increase the difficulty compared to the original game," and "It has the presentation of a spreadsheet, but as much heart and soul as Dune 2, Total Annihilation, Homeworld, Galactic Civilizations and Desktop Tower Defense rolled into one."

A general theme throughout professional third-party reviews of the game, many of which have been indexed on the developer's site, has been that the graphics are seriously underwhelming, the gameplay is novel, and that the difficulty is high compared to even other hardcore strategy titles.