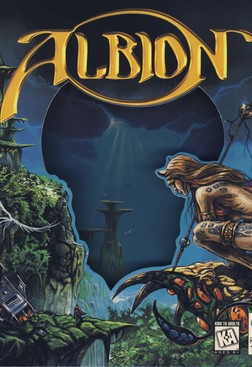 Albion is a single player role-playing video game developed and published by Blue Byte for MS-DOS in ‹The template Vgy is being considered for deletion.› 1995. It was originally released in German, then translated to English for international release. The game features a science fiction setting that incorporates traditional fantasy elements, such as magic. The game was intended to be developed for the Amiga computer, but was developed for MS-DOS instead when Commodore become bankrupt.

The game was re-released in 2015 on Gog.com with support for Windows.

In the year 2230, the gigantic, interstellar space ship Toronto emerges from hyperspace at the edge of a distant planetary system. The ship's owners, the multinational DDT corporation, believe that there are rich deposits of raw materials on one of the planets in the system, and the Toronto is to mine the whole planet's resources at once. The player is cast in the role of Tom Driscoll, the pilot of the exploration shuttle sent to verify the status of the planet. His shuttle malfunctions, forcing him to make a crash landing. Tom discovers that the data that described the planet as a desert world was false. Albion is a world teeming with life, secrets, surprises, and magic. It is inhabited by the sentient, tall and slender, feline-like humanoids called Iskai and the many divisions of Celtic humans that traveled magically to the planet in their era. It is up to Driscoll to alert the crew of the Toronto to the true situation to save Albion and its inhabitants.

Albion is a role-playing video game and features a number of gameplay elements typical of that genre. The player controls a party of up to six characters, each with their own skills and abilities. With these characters they may explore the game world, fight enemies, and engage in conversation or trade. Characters earn experience points by defeating enemies or by solving certain puzzles. When a character has sufficient experience points they will advance in level, increasing their maximum life and spell points. They will also receive training points which can be expended at a trainer to permanently increase one or more of their skills.

Albion uses a hybrid 2D/3D graphical system to depict its environments. Most interior locations are shown using a 2D overhead view, centered on the player's party. Movement is possible using either the keyboard or the mouse and the mouse is used to examine or manipulate objects within the reach of the party leader. A similar view is used when exploring the larger world outside the cities, but with objects and characters shown on a much smaller scale. Upon entering most dungeons, caves, and the exteriors of larger cities the game switches to a real-time first-person 3D view. As in the 2D view, players may use the mouse or keyboard to move around and the mouse is used to select objects to interact with. A 2D automap is available to assist navigation in these areas.

Combat occurs when the party runs into one or more enemies. The combat system is turn-based and takes place on a five-by-six grid similar to a chess board, with the player's characters arranged at the bottom and their enemies at the top. At the start of each turn, the player selects an action for each character to perform: Attack, Move, Use magic, Use Item, or Flee. The order in which party members and enemies execute their actions depends on their relative speeds and is an important tactical consideration. Since attacks are targeted at a grid square rather than the character or enemy in it, attacks will miss if their intended target moves before they are made, even if that target is still within reach. The movement of the player's characters is limited to the bottom two rows, but there is also an 'Advance Party' option which moves all enemies one row towards the party.