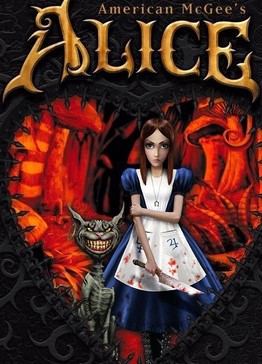 American McGee's Alice is a third-person psychological horror action-adventure platform video game released for PC on December 6, 2000. The game, developed by Rogue Entertainment and published by Electronic Arts, is an unofficial sequel to Lewis Carroll's Alice novels. It was designed by American McGee and features music composed by Chris Vrenna.

The game uses the id Tech 3 game engine. A PlayStation 2 port was in development and planned for a release sometime around 2001 but was canceled.citation needed Set years after Alice's Adventures in Wonderland and Through the Looking-Glass, the game features an older, more cynical and macabre incarnation of Alice. As of 22 July 2010, American McGee's Alice has sold over 1.5 million copies.

A sequel, Alice: Madness Returns, was released June 14, 2011. Downloadable ports of the game for PlayStation 3 and Xbox 360 were also made to coincide with the sequel's release.

The game's setting presents a more macabre rendition of Wonderland than in Lewis Carroll's original portrayal. Wonderland, being a creation of Alice's mind, has been corrupted. Alice's primary objective is to save Wonderland, and in doing so, save herself.

Shortly after Through the Looking-Glass, and What Alice Found There, at the age of seven, Alice Liddell witnessed the death of her family in an accidental fire that destroyed her home and killed both her parents, who were trapped and burned alive. Suffering from survivor's guilt, Alice lost her grasp on reality and was ultimately sent to Rutledge Asylum, where she is observed and treated by Dr. Heironymous Wilson for her catatonia. Alice's only possession in Rutledge is a stuffed rabbit. Ten years after Alice was committed to Rutledge, The White Rabbit summons Alice back to Wonderland, which has not only become a corrupted, twisted version of itself due to Alice's broken mind, but has also come under the horrible rule of the Queen of Hearts. The Cheshire Cat serves as Alice's companion throughout the game, frequently appearing to guide her with cryptic comments.

When Alice falls down the hole, she finds herself in the Village of the Doomed. This network of tunnels and caves is the home of the Torch Gnomes, and is patrolled by the Queen of Hearts' Card Guards. Beyond the subterranean village is the Fortress of Doors, where the main attraction is a school of insane children. Within the school lies an ancient book of recipes for magic potions, as well as the ingredients for one concoction in particular which will be useful to Alice.

Beyond the fortress and across a rough, uncharted landscape lies the Vale of Tears, where Alice's friends Bill McGill and the Mock Turtle reside, along with the Duchess. A giant river runs throughout the gloomy, mist-shrouded landscape, and another aquatic location is accessible through a well inside Bill McGill's house. The well is sealed until the Duchess is slain.

On the other side of the Vale of Tears lies Wonderland Woods, one of the largest regions in the game. The woods are initially filled by ponds, cliffs and jump mushrooms, but much deeper into the woods is a region of rock and magma. This section leads to several new regions including the Cave of the Oracle, the Pale Realm, the Jabberwock's Lair, and the Majestic Maze. The Cave of the Oracle is home to a wise entity that is revealed later to be the Caterpillar.

The Pale Realm makes a transition to the surface of a chessboard, as delving further into this area leads to the White Castle of Looking Glass Land, which is home to life-size chess pieces; the White pieces join Alice in the fight against the Red pieces, a deviation from her normally unhelpful "allies" from earlier portions of the game. Alice is transformed twice into a chess piece herself to pass certain obstacles.

Following this is a distorted version of Rutledge Asylum (where Alice has been incarcerated since her parents' tragic deaths). It is run by Tweedle Dee and Tweedle Dum and also houses the Mad Hatter's laboratory.

The path to the Jabberwock's Lair leads into the Land of Fire and Brimstone, a volcanic region of Wonderland and a reminder of the fire in which her family died. It is here that the terrible Jabberwock—a semi-mechanized servant of the Queen of Hearts and the incarnation of Alice's guilt—resides, in the remains of Alice's old home.

The Majestic Maze ends on the road to Queen of Hearts Land, a region heavily guarded by card guards, boojums, and other members of the Queen of Hearts' personal army.

Queensland is the final province of Wonderland. In it lies the Heart Palace from which the Queen of Hearts commands. Tentacles and other repulsive appendages are seen protruding from every organic wall in this area, and numerous areas even resemble body parts, giving the impression that Alice is travelling through the Queen's body.

Ultimately, Alice confronts the Queen, a manifestation of her insanity, and in defeating her, overcomes her issues. Alice then awakens from her catatonic state, and Wonderland is 'reset' back to its previously-seen cheery, wholesome, and slightly quirky state, with the friends she'd lost along the way coming back to life. The game ends with a sane Alice leaving Rutledge's Asylum.