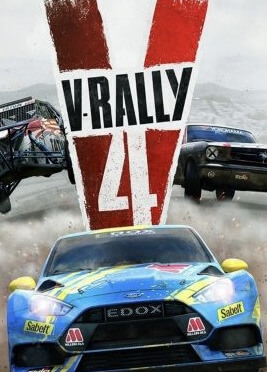 V-Rally 4 is a racing video game developed by Kylotonn and published by Bigben Interactive for PlayStation 4, Xbox One, Microsoft Windows and Nintendo Switch in 2018. The developer had previously worked on the official 2017 WRC game.

V-Rally 4 is a racing game where players drive rally cars through a series of stages. The game features five disciplines, with 51 cars from 19 manufacturers, including Porsche, Skoda and Norma. Courses include Monument Valley, Niger, Romania and Malaysia.

V-Rally 4 was developed by Kylotonn, a French video game company based in Paris. Some members of the development team worked on previous V-Rally games.

PlayStation Official Magazine said "The rally fundamentals are there, but so is a disappointingly shoddy career mode. Genre fans will find a lot to love, but this is far from taking pole position." Metro said it was "An unlikely sequel that ultimately struggles to find its place among today’s line-up of more polished and more established alternatives." IGN summarised it "An arcade racing game with some spectacular moments, whose roots are guiltily stuck in the past." 4Players said "While Kylotonns rally games showed positive tendencies with the WRC series, this is a serious setback. This is a disappointing comeback for the franchise."