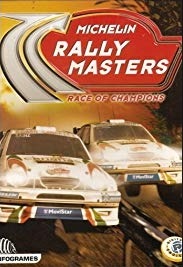 Michelin Rally Masters: Race of Champions, or in short Rally Masters, is a racing video game developed by Digital Illusions CE and published by Infogrames in 2000 for Microsoft Windows and PlayStation. It is a rally racing game branded after the Race of Champions sporting event, and features 20 licensed rally automobiles.

A port of the game for the Nintendo 64 was in the works, to be released as Test Drive Rally on the North American market, but the publisher ultimately cancelled the project.