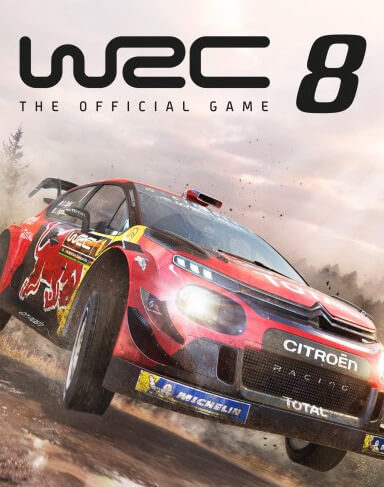 WRC 8 was revealed as the official game of the 2019 FIA World Rally Championship in February 2019. It features dynamic weather and an entirely redesigned career mode reminiscent of Codemasters' Formula One series. The game also sees the addition of new classic cars, much like its main rival, Codemasters’ Colin McRae Rally/DiRT series, including the Lancia Stratos and Renault Alpine. The game also offers more content than the previous game, with 102 special stages spread across the championship’s 14 countries. The game was released to Microsoft Windows, Nintendo Switch, PlayStation 4 and Xbox One in September 2019, and was later ported to Nintendo Switch on 31 October 2019.

WRC 8 received "fairly positive" reviews, according to video game review aggregator Metacritic, with reviewers praising the major improvements made to both the game’s physics and graphics.

Martin Robinson of Eurogamer praised the ongoing evolution of the series, saying "It's a significant year for the series, having taken a year away and returning from its break revitalised and refreshed. In fact, having personally only kept a watching brief on Kylotonn's tenure on the series since it signed up with WRC 5, it feels like a different series entirely."

Joseph Schaffner of Dualshockers ranked the game "great" and gave it an 8 out of 10, stating he was pleased with the improvements to the game’s physics. However, he criticised the career mode for its repetitiveness and lack of content which was an issue in past titles.