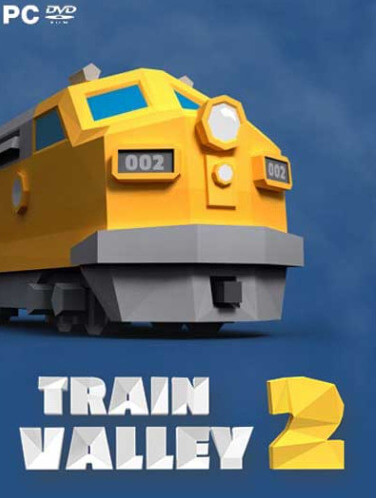 Train Valley 2 is a puzzle-strategy train simulator video game developed by Flazm as a sequel to Train Valley. It was released on 29 March 2018.

Cities demand various goods, such as cattle, furniture, iron ore, or steel plates. Each level is complete once all city demands are delivered to their respective stations, who also supply workers to operate industries. Unlike the original Train Valley, where the player just has to deliver a set number of trains, the player has to manage production chains (for instance: furniture requires glass and boards, which in turn requires sand and logs). In addition to raw materials, nearly every industry requires workers to operate, and some of them also require electricity, which in turn requires a connected, operating power plant. Also unlike the first game, passengers and destinations aren't randomized. Instead the player delivers workers and materials to the various industries using the locomotives available to him in the level. As goods are delivered, the player gains income that can be used to lay more track, upgrade his locomotives to go faster and carry larger loads, and buy more of them to operate more trains simultaneously.

Each level contains five objectives which create a five-star rating for the level. Two of the objectives are for accomplishing different tasks (such as "do not destroy tracks") while the other three tasks are time challenges (such as "complete the level in under 10 minutes"). Each objective gives the level one star. The early access version of Train Valley 2 contains 20 levels, but the game will contain 50 levels in the full release.

On December 24, 2016, Flazm announced that Train Valley 2 was in development, and would be released in early 2018. On April 8, they announced that over ten thousand players had downloaded the game in the first week of release.

The graphics have been described as "aesthetically pleasing". The terrain "can be difficult to interpret" but the maps are "still interesting and varied".