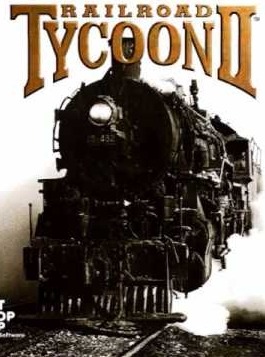 Gameplay is displayed in dimetric view, unlike the top-down view of Railroad Tycoon.

Railroad Tycoon II is a railroad simulation that covers the entire history of railroads from inception to the present day and beyond. The player chooses a map and assumes the role of chairman of a railroad company. The player tries to make profits for investors and completes various other objectives while being hindered by rivals, random events such as train breakdowns, train robbers, economic swings, and scripted events particular to the scenario.

Most of the gameplay consists of building tracks, stations and trains, which are used for hauling passengers and freight from one station to another. Delivery revenue can vary by time, distance, demand, cargo type, economic state, station improvements and difficulty level. Companies can connect to and use each others' tracks and stations, so revenue can be split. Expenses include the fuel, track and engine maintenance and management fee. The fuel cost depends on the cargo weight and the distance each engine runs. Engine maintenance depends on engine age and the engine's type (some locomotives cost more to maintain than others). The elder engines cost more to keep them on the line. The track maintenance is solely calculated from track mileage.

The player determines what kind of cargo(es) to put on/off at each station that the player adds to its routing. Way-points may also be inserted to override default track selection where multiple paths are possible.

There are many industries in the game, and each can produce and/or convert specific cargoes. For example, coal mines produce coal, iron mines produce iron, and, in the advanced game, a steel mill can convert 1 load of iron plus 1 load of coal into 2 loads of steel. The players are encouraged to find a chain of production to make new cargo by hauling the right type of cargo to each step of the industries. By doing this right, the player can haul raw materials one way, "create" manufactured return cargo, and make even more money hauling finished products back the other way.