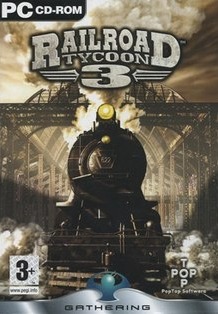 With nearly 60 locomotives in the game (nearly 70 in the Coast to Coast expansion), the game has the most locomotives of the Railroad Tycoon franchise with locomotives from the United States, Britain, France, Germany, Italy, Japan, South Africa, Poland, Russia and more even fictional locomotives like the E-88 and the TransEuro.

The game interface is in full 3D, with free camera movement. The square grid is no longer rigid, as it was in Railroad Tycoon and Railroad Tycoon II - rail and structures can now be rotated 360 degrees.

The economic model has been reworked. In previous games, goods could only be picked up at a station, and revenue depended on the distance between stations. Carloads in Railroad Tycoon 3 slowly move across the map (representing road and water transport) along the gradient of a scalar field representing price, where supply and demand sites function as sources and sinks. Revenue depends on the price difference between pick-up and delivery. This has several effects; raw materials can find their way to industries and get processed, without any trains involved, and a train does not need to pick up goods at the source.

Other changes include: each carload of mail, passengers and troops now has a destination; car setup can be automated, so that trains always pick up the cars that yield the most revenue; warehouse buildings also appear in the game, completing the commodity market the same way as ports do; trains can pass each other on a single track (as in the original Railroad Tycoon on the lowest difficulty level); no need for signal towers, as well as station improvements (post offices, restaurants etc.), are placed individually on the map; players can buy industries, and also build processing industries wherever they like; processing industries have limited capacity, but they can be upgraded.

Johnny L. Wilson of Computer Gaming World praised Railroad Tycoon 3's visuals, as well as the detail of its "marvelous" economics simulation. He considered the sequel "more than a face-lift" that simultaneously possessed "all the features that made its predecessors great". However, Wilson criticized its use of certain train models in countries where they had historically been absent. Writing for X-Play, John Duggan called Railroad Tycoon 3 "a serious time suck and highly addictive." While he criticized its changes to the ledger interface from Railroad Tycoon II, he noted the sequel's "more sophisticated economic model", and summarized it as a "rewarding" experience.

GameSpy named Railroad Tycoon 3 the tenth-best computer game of 2003, and the year's best "PC Empire Builder" game. The editors of Computer Gaming World nominated it for their 2003 "Strategy Game of the Year" award, which ultimately went to Age of Wonders: Shadow Magic. They wrote that "PopTop Software has done an amazing job updating this venerable series", but found Railroad Tycoon 3 too lacking in innovation to win the award. The game was also a finalist for IGN's "Best Economic Simulation Game" and GameSpot's "Best PC Game" and "Best Strategy Game" awards, but lost to SimCity 4 and Rise of Nations in these categories.