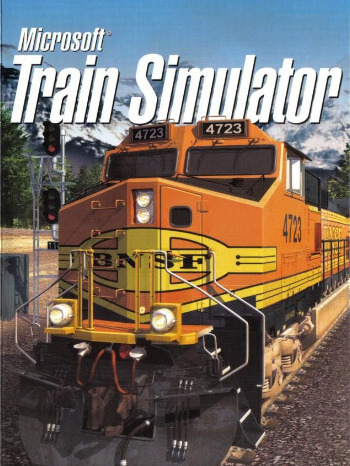 Microsoft Train Simulator is a train simulator for Microsoft Windows, released in May 2001 and developed by UK-based Kuju Entertainment. It sold one million units worldwide by 2005.

The simulation allows players to operate a train on various routes in Europe, Asia, and North America. Players need to stop and start the train, couple wagons, using the computer mouse, keyboard or a hardware addition such as Raildriver to operate the controls. Sound effects are enabled.

Internationally, Train Simulator received a "Silver" sales award from the Entertainment and Leisure Software Publishers Association (ELSPA), indicating sales of at least 100,000 copies in the United Kingdom. In the German market, the Verband der Unterhaltungssoftware Deutschland (VUD) presented it with a "Gold" certification in early 2003, for sales of at least 100,000 units across Germany, Austria and Switzerland.

Train Simulator ultimately sold one million units by 2005, and is, despite its age, still very popular and has a large, active community.

The Academy of Interactive Arts & Sciences nominated Microsoft Train Simulator for its 2001 "Computer Simulation Game of the Year" award, which ultimately went to Microsoft Flight Simulator 2002.

The game features mod support as routes, trains, cargoes, scenery, etc. are abundant in the game. The installment of the mods is somewhat tricky since they have to be loaded into set files like Routes for Routes and Trainset for Trains, rollingstock, consists, etc. Over 1,000 mods were created for the game and are mostly hosted on community sites such as trainsim.com, uktrainsim.com and elvastower.com, to name a few. Additionally, MSTS BIN, a community mod that aimed to add features and fix old MSTS bugs has since been released.