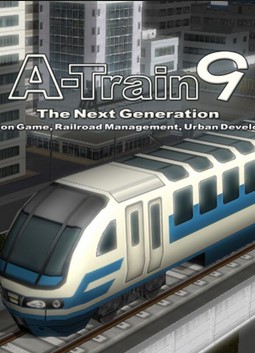 A-Train 9 was released on February 11, 2010 in Japan, and on March 15, 2012 worldwide by UIG Entertainment under the names The Train Giant in English and Der Bahn Gigant in German. It is compatible with Windows XP, Vista and 7, and is also compatible with the said 64-bit versions. Two Japan-only building kits were released, the first on October 8, 2010 and the second on December 23, 2010. The Japan version also includes a 3D patch costing ¥1050 that can be played using 3D glasses, and the German version includes an unofficial patch that adds 200 trains to the game on top of the existing 11 trains. A-Train 9 includes buses and trucks, grouped by distances they travel and the work they manage (e.g. intercity, local, heavy goods, etc.), power plants, Japanese castles and more authentic-looking Japanese buildings.

On December 7, 2012, A-Train 9 Version 2.0: Professional Edition was released in Japan, supporting Windows XP, Vista, 7 and 8. It is available in DVD format as well as a software patch which users of the original A-Train 9 can upgrade to. Version 2.0 includes all content from the two expansion packs intended for the original A-Train 9 plus several new buildings and trains, as well as several bug fixes. Three DLCs were released for The Train Giant starting on August 1, 2012 with "Shanghai". "Boston" and the "Elbe Estuary" were to follow but are impossible to find. "The Train Giant" can be purchased on eBay for about $10 – $15. The version with a "3" on the cover contains the 3 DLCs. On June 29, 2014 a second new version, entitled A-Train Version 3.0: Railway Simulator was later released. This version was then released worldwide on October 10, 2014 via Steam, although due to licensing issues fewer real life trains are available from the Japanese version.