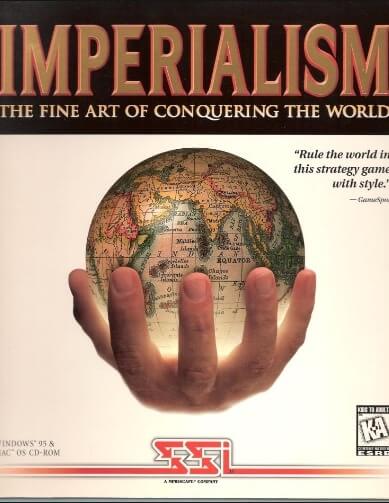 Imperialism is a turn-based strategy game for Microsoft Windows and Apple Macintosh computers, developed by Frog City Software and published by Strategic Simulations in 1997. In Imperialism, the player is the ruler of a 19th-century country and aims to become ruler of the world by conquest or by vote. Imperialism was followed by Imperialism II: Age of Exploration.

There are two ways to play Imperialism: in a fictional, randomly generated world, or in a historical scenario. In the first case, the player selects one of seven "great powers" and starts ruling in 1815, a year considered by many historians the beginning of the 19th-century era in the real world. The goal is to be voted world ruler by a two-thirds majority in the "Council of Governors", in which all provincial governors of the world convene once in a decade. Governors in "minor nations" tend to vote for great powers that have favored their country in trade and diplomacy, whereas governors in great powers vote for strong military powers. If no two-thirds majority is ever reached, the game continues until the year 1915, when the power with the largest number of governors behind it wins the game. Although victory is determined by the Council of Governors, the game score is determined by how much a player has built, including the size of a Great Power's military, workforce, transportation network, merchant marine, diplomatic standing and number of provinces controlled.

Empire building can be achieved either through diplomacy or through conquest. In either case, the empire must have a solid economic grounding, which is established by the exploitation of the country's resources (wood, ore, etc.), by industry (for example, turning raw materials iron and coal into steel) and by trade.

In the historical scenarios, the player chooses a European power - available are Great Britain, France, Austria-Hungary, the Ottoman Empire, Russia, and, depending on the period chosen, Prussia and Sardinia, or respectively Germany and Italy. The game starts not in 1815 but either in 1820 (apparently so that France isn't too weak at the start of the game), in 1848, the year of revolutions, or in 1882, at the start of the arms race that eventually led to World War I. The end of the game is still the same, except that in the third scenario (1882) the Council of Governors does not convene until 1915.

Imperialism is entirely turn-based. Each turn, players make their decisions in five screens: the map screen, where "specialists" (prospectors, engineers, etc.) are put to work, and military orders are given; the transport screen, where transport capacity is allocated; the industry screen, where production is determined and workers are trained in various ways; the trade screen, where offers and bids for the next trade session are determined; and the diplomacy screen, where diplomatic decisions are made.

When all the players click the "End turn" button, the orders are processed. Turn-based trade sessions, diplomacy sessions (the acceptance/declining of treaties) and battles follow. Battles too are turn-based, and they can be either fought by the player or left to the game AI. Naval battles are always handled by the AI.

In multiplayer mode, at most 7 players can play together over a network. Games can be played over a LAN or the Internet. Imperialism offers a tutorial mode and five levels of game difficulty. Game editors and mods have also been published to create new scenarios, such as a world map.

In Imperialism's economic model, states control production and engage in trade. To produce anything, raw materials are needed. These can be bought on the world market, or gained by exploitation of resources in the player's country. For instance, timber can be obtained by exploiting forests. It can subsequently be transformed into lumber in a lumber mill. Lumber can be used to expand internal transport, to increase factory output, or for producing merchant ships and warships. It can also be processed further into furniture, which is used to recruit new workers, but more commonly is sold on the market to produce revenue. Timber can also be processed into paper, which is used to train workers for higher levels of productivity, and then educate them so that they can serve in more advanced military units. Paper is also necessary to train expert workers as specialists (i.e. prospectors, engineers, miners, ranchers, farmers, foresters and oil drillers).

Often a Great Power will buy raw materials (such as timber) from a Minor Nation and sell the refined goods (furniture) back to the same or another minor nation, generating revenue as well as improving diplomatic relations. From the start of the game, Great Powers compete to be the favored trade partner of resource-rich minor nations, using trade subsidies and various forms of diplomacy.

Great Powers can encourage closer relationships with Minor Powers and each other with subsidies and grants of cash.