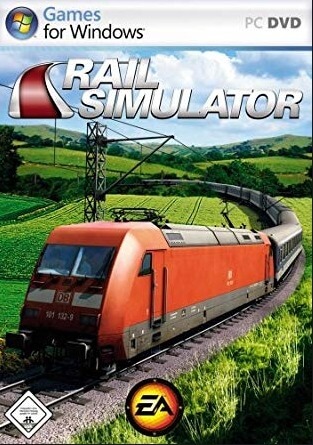 Rail Simulator (Kuju Rail Simulator) is a train simulation published by Electronic Arts (EA). It was produced by UK based Kuju Entertainment, the company which developed Microsoft Train Simulator (MSTS) with Microsoft. After release of the EU version, EA's support and further development of the title was taken over by Rail Simulator Developments Ltd (RSDL), who continued to provide updates, fixes, official expansion packs and new content to players. RSDL has also released a much anticipated sequel to the first game called RailWorks, both online and on DVD-ROM.

Steam, diesel and electric traction trains, keyboard or mouse control of throttles, brakes and switches with three control modes for varying player skills. A variety of scenarios are available as well as an exploratory style free roam mode. Cargos and passengers are animated, and weather changes dynamically with time. The game has been criticized by reviewers for not providing enough help for newcomers to train simulation, and lack of complete instructions in the guides.

Since release, Kuju Rail Simulator received generally positive reviews from reviewers. IGN awarded 7.0 out of 10, praising the title's attention to its source material. Some jagged graphics were criticized (with foliage going through the cab instead of bouncing off the windshield, for example) and the fact that only true rail fanatics could ever get any fun out of KRS. The lack of any in-game tutorials was mentioned, with "members of the community ... making video walk-throughs, while lamenting the lack of a thick, fully printed manual."