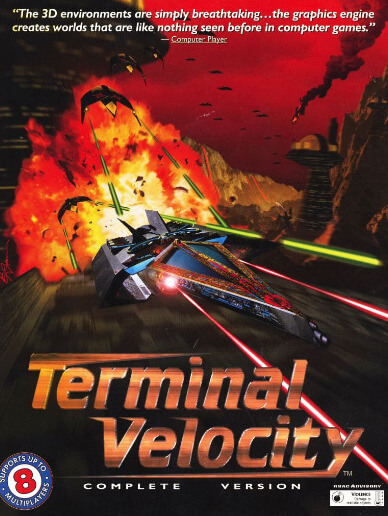 Terminal Velocity is a simulation video game originally developed by Terminal Reality and published by 3D Realms for DOS and Windows 95 and MacSoft for Mac OS. It is an arcade-style flight combat game, with simpler game controls and physics than flight simulators. It is known for its fast, high-energy action sequences, compared to flight simulators of the time.

Terminal Reality also developed a similar game, Fury3, published that same year by Microsoft. It used the same game engine and basic game mechanics, but was designed to run natively on the new Windows 95 operating system. Though considered to add little to the gameplay of Terminal Velocity, Fury3 spawned an add-on pack, F!Zone, as well as a sequel, Hellbender.

Terminal Velocity is a combat flight simulator. The player's craft has no inertia, meaning its course can be changed instantly and can fly at low speeds without falling. There are seven different weapons, ranging from guns, blasters and rockets to homing missiles and a rare secret weapon. Additionally, it possesses powerful afterburners that allow it to move at very high speed, which is useful in order to evade attacks, but sacrifices the ability to return fire temporarily (they can be selected like weapons, and if they are, the fire button will ignite the afterburners). The craft is able to survive some hits, and even some collisions with the terrain, including tunnels.

Each of the 27 missions consists of several objectives, e.g. enemies which must be destroyed, tunnel entrances and exits, mere checkpoints, and an extraction point. At the end of each planet is a powerful boss enemy (or more rarely, a weak boss enemy) that must be destroyed before either proceeding to the next planet or completing the episode.

Terminal Velocity (called "Velocity Brawl" during development) was co-produced by Tom Hall. The main programmer of the game was Mark Randel, the former lead programmer of Microsoft Flight Simulator.

The game has three episodes, the first of which was distributed as shareware. Each episode features three different worlds, making a total of nine levels; the only exception is the final planet of Episode 3, Proxima Seven, which has only two stages. At the end of each world is a boss enemy that must be destroyed before proceeding to the next world. Following the release of the shareware version, publisher 3D Realms was inundated with requests that the game be playable with a mouse, leading the company to include a mouse option in the commercial version of the game.

The story is set in the year 2704, when the ASFAR (Alliance of Space-Faring Alien Races), of which Earth is a member, suddenly turns against Earth and their fleet ravages the planet, starting a war. The player flies a powerful starfighter, the TV-202, in a series of missions to defeat the enemy. In Episode 3, the player learns that a huge supercomputer known as X.I. (Xenocidic Initiative), located on Proxima Seven, is responsible for the war. Their final mission is to eliminate it. A hidden mission can take place after the main plot only in the CD ROM version where the player must investigate a sudden metamorphosis of an unknown nearby planet and destroy the force that changed the face of the planet. It is revealed here that this force drove a man named Sy Wickens into insanity, and how the X.I. Supercomputer had "accidentally" digitized Sy Wickens' persona.

A reviewer for Next Generation, while acknowledging that the game is "fun to play" and has a uniquely wide variety of open locales, gave it an overall negative review. Arguing that the game is a first-person shooter and that "the genre, as currently exploited, is beginning to wear thin", he gave it two out of five stars.