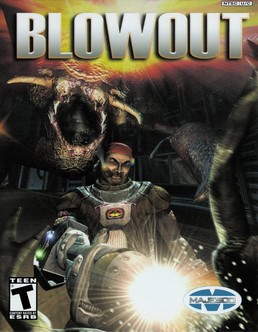 BlowOut is a 2003 run and gun video game developed by Terminal Reality and published by Majesco Entertainment, released for the Microsoft Windows, PlayStation 2, Xbox, and GameCube.

The game plays as a 2.5D side-scrolling run and gun shoot 'em up with elements of a platformer. It follows the tradition of games such as Contra and Metal Slug, with a power-up-based non-linear exploration structure akin to Metroid. The player takes the role of TransFed Marshall John "Dutch" Cane, a space marine sent to check up on researchers on the space platform named Honour Guard, only to discover that they have been mutilated by aliens. On the way through each level, the player can blast through walls, floors or ceilings to reveal secret areas, and shoot in full 360-degree range. There are 10 levels in total.