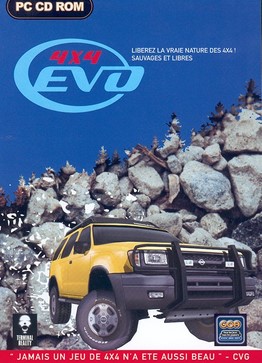 4x4 Evo (also re-released as 4x4 Evolution) is a video game developed by Terminal Reality for the Windows, Macintosh, PlayStation 2 and Dreamcast platforms. It is one of the first console games to have cross-platform online play where Dreamcast, Macintosh and Windows versions of the game appear online at the same time. The game can use maps created by users to download onto a hard drive, as well as a Dreamcast VMU. All versions of the game are similar in quality and gameplay, although the online systems feature a mode to customize the players' own truck and use it online. The game is still online-capable on all systems except for PlayStation 2. This was Terminal Reality's only video game to be released for the Dreamcast. A European PAL Dreamcast release was planned in early 2001, but scrapped for unknown reasons.

Gameplay features off-road racing of over 70 licensed truck manufacturers. Modes featured in the game were a Career Mode, Online Mode, Map editor and versus mode. The career mode is the most important part of the game to feature a way to buy better trucks similar to the Gran Turismo series. The Career mode also gives the player 6 purpose built race vehicles: Chevrolet Trail Blazer Race SUV 2WD, Dodge Dakota Race Truck 4WD, Ford F-150 Race Truck 2WD, Mitsubishi Pajero Rally 4WD, Nissan Xterra Race SUV 4WD, and the Toyota Tundra Race Truck 2WD. They cost anywhere from $350,000 up to $850,000. These are the fastest vehicles in the game. Recently, KC Vale acquired permission from Terminal Reality Incorporated to upload the game to his web server; however, the original vehicles have been removed due to an expired license.

Although this game was released about nineteen years ago, the online community still exists, with a fair number of players, and some moderators who manage chatrooms. Dedicated servers are long gone, but it is possible to host games over the internet, and join other player-hosted games. The game has been brought back online thanks to Dreamcast Live , as one of the 16 games so far to be brought back online on the Dreamcast