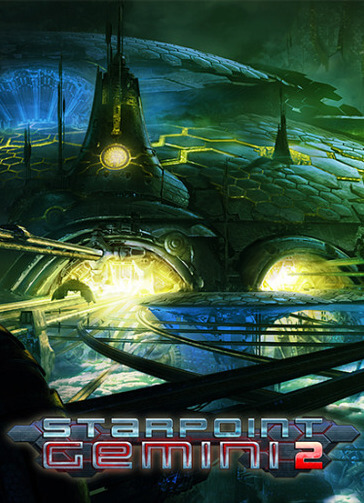 Starpoint Gemini 2 (abbreviated to SPG2 or SG2) is a space trading and combat simulator developed by the Croatian-based Little Green Men Games (LGM Games) development studio. It is a direct sequel to Starpoint Gemini, which was released in 2010.

Starpoint Gemini 2 is a full 3D space sim/RPG. The in-game world is the Gemini system, which consists of various cohesive star systems. Players captain one of around seventy ships, controlling a single vessel rather than a fleet, although wingmen as well as ship’s officers will be available for hiring. The game features pre-scripted story missions, but also randomly generated “Freelance missions” that rely on player’s actions and allegiances.

At the beginning of 2014, LGM Games became an official Oculus Rift developer and have begun implementing support for the VR device. Their stated plan is to "make all the necessary modifications in rendering and resolution in order to allow players to experience all Oculus Rift is capable of offering".

The player can choose to play campaign or freeroam mode. The game features an extensive space simulation gameplay where the player is put in control of capital ships instead of more classic approach of controlling fighter based vehicles.

The player has the freedom to do as he likes so professions in the game vary from space pirate, trader, privateer, asteroid miner, gas miner, scientist, explorer, salvager to lawkeeper. The player is open to explore those professions as he likes but there is a set class that is picked upon creating your character. The 3 classes are: Commander, Gunner and Engineer. Commander being specialized in augmenting your fleet, gunner in offensive capabilities and Engineer being a mix in between while also featuring support skills.

Players can utilize control of their weapon batteries and turret based weapon system. Depending on the ship preset conditions he can equip a fixed amount of weapon types to his ship which also have a preset locations on the ship and turret firing angles. Furthermore the player can increase or decrease the amount of turrets placed to his ship. Weapon system features light weapons(beams/railguns/plasma) and heavy weapons(missiles/shockwave). The shield system also follows more unconventional approach by splitting them in 4 parts instead of a usual single system. Player can use 4 skills which differ depending on the picked class and he can use various equipment which augments combat abilities. All this allows for a more tactical and faster paced gameplay.

In the campaign mode, the player starts out as Adrian Faulkner, a 22-year-old son of the legendary Gemini League hero, Gabriel Faulkner, known best for his endeavors in the last Gemini war. The player struggles to unveil the mysteries of his father's death and his efforts to save the Gemini from foreign invasions. Along with the main story quest line, the player is also able to pause his main story progression in order to enjoy features that the freeroam mode provides from the start.

The player is thrown into a vast universe with his starting ship to explore and play as he likes. There are no obligations to complete any quests, and it is essentially a sandbox experience where players can choose to play as they like.

Starpoint Gemini 2 has been generally favorable by critics. Aggregating review websites GameRankings and Metacritic gave the game 74.09%  and 70/100.

Patrick Carlson from PC Gamer described the game as one of the most positive and relaxing game experiences he's had in a long time.

Nicholas Plouffe from Canadian Online Gamers thanked the developers for making him lose in his own little world.

Nick Horth from Strategy Informer praises the game for its pirate system: "Want to be a despicable pirate, preying on weak transport ships and poorly defended mining stations? That's fine, knock yourself out."