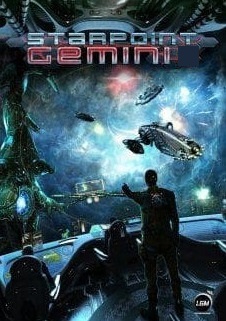 Starpoint Gemini is a real-time, simulation, role-playing game focused on the control and strengths of individual vessels and their command crews. The game is set in a science-fiction universe where various thriving technological directions exist side by side. Players will freely traverse the rich and filled vastness of the Gemini star system, fight skirmishes with rogue ships, trade commodities, mine ore from asteroids, research anomalies, buy new vessels, enlarge their fleet, upgrade their ships with state-of-the-art technology, increase their experience and rank to learn more powerful maneuvers and ultimately use all that in large scale engagements against other fleets and battlestations.

The player navigates a large and powerful spaceship. Every vessel in the game can be controlled and upgraded with over 300 ship systems ranging from Shield emitters and Grappling beams to Plasma cannons and Shockwave generators, to better suit the player. In addition, the player can create their "captain avatar" in the beginning of the game with some starting maneuvers (skills) which they then later upgrade during the game. He can also add new maneuvers by spending maneuver points he gained with experience levels.

Starpoint Gemini features a combination of tactical combat and extensive role-playing features that support a wide variety of overall strategy. The player is able to undertake any of the game’s possible career paths, such as trade, repair, piracy, research, salvaging, mining, or a mixture. While most games of the space adventure ilk offer the same possibilities, Starpoint Gemini offers up to thirty-eight skills and eighteen perks earned through experience (and officers the player can hire for additional skills), along with twenty-one special abilities spread across fifty ships. The game has a large amount of variety, allowing the player to forge any path of your liking. Missions are also varied, providing your primary source of income in the game since the trade interface leaves room for improvement.

Starpoint Gemini offers the main storyline of some thirty missions, but also leaves a free choice to every individual player, whether they will actually follow the main plot or roam around at their own leisure. The entire Gemini star system is a living universe where commerce, mining, talking and fighting happens all around you. It is up to the player to survey the Gemini world, and choose their career. Since, in a way, your main character in a game is a large starship, the game offers many ways to customize it and adjust to your way of doing things. The captain can be a specialist in some technical field or warfare area, and he gains levels and perks in time. The ships themselves have unique abilities, and can also be customized with large numbers of weapons, shields, power cores and science equipment. In addition, a player can also employ several crew members, each with his own bonuses and abilities, depending on their position and who is currently available. Once that is done, one can travel around Gemini sectors in search of wealth,(trading, mining), glory,(fighting,taking up freelance missions), or investigate anomalies. One can use everything from small gunships to large battlecruisers. The player has many tactics: frontal assault, cloaking approach, subtargeting enemy ship's subsystems, boarding the enemy vessel, and many more.

Starpoint Gemini 2 is the sequel to original PC game released in 2010. Players will once again be offered a chance to experience unrestricted life in Gemini starsystem. Most of the game elements are unchanged, but on the technical side game is greatly improved. Movement is now in full 3D universe, combat controls are more direct and action based, while most significant changes are visible in graphics features aimed at keeping the game up to date.