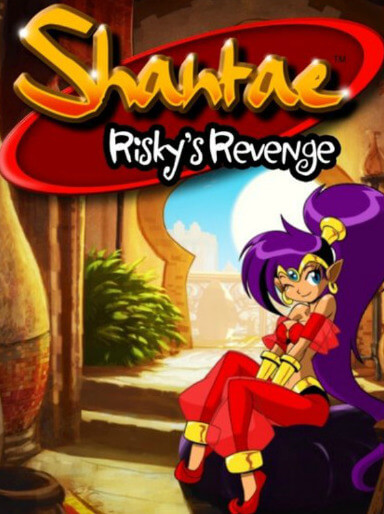 Shantae: Risky's Revenge is a platform video game developed by WayForward Technologies for Nintendo DSi. The second installment in the Shantae series, Risky's Revenge is sequel to the Game Boy Color video game Shantae and is succeeded by the Nintendo 3DS and Wii U sequel Shantae and the Pirate's Curse, and the fourth installment Shantae: Half-Genie Hero. An iOS port was made and released on October 27, 2011 and features a new "Magic Mode". A Microsoft Windows version was released on June 15, 2014 as Shantae: Risky's Revenge - Director's Cut, featuring a re-imagined Warp System and the "Magic Mode" from the iOS port. A PlayStation 4 port of Director's Cut was released on June 23, 2015 with a Wii U port released on March 24, 2016.

Players take the role of Shantae, a half-genie who must explore various areas in order to stop her nemesis, an evil pirate named Risky Boots. Shantae's main form of offense is whipping enemies with her hair, though she may also acquire magic spells that allow her to use various ranged attacks. In order to progress through the game, Shantae needs to find various transformation spells. These spells, activated by performing a belly dance, transform Shantae into various animals with unique abilities. These include a monkey that can cling onto certain surfaces and dash between walls, an elephant that can smash rocks to open new areas, and a mermaid that can swim underwater. Players can use their abilities to access new areas and locate special items hidden around the world, including Heart Holders, which increase Shantae's maximum health, and Magic Jam, which players can use to purchase additional upgrades and abilities.

During the annual Relics Hunters Expo, Shantae and her friends watch her Uncle Mimic unveil his latest find: an ordinary-looking lamp encased in stone. As they wonder its purpose, Risky Boots and her pirates crash the expo and steal the lamp. Shantae battles her, but is knocked out, allowing Risky to escape. Blaming the half-genie for the town being in disarray and failing to do her job properly, Mayor Scuttlebutt fires her as Scuttle Town's Guardian.

Despite no longer being a Guardian Genie, Shantae still decides to take responsibility to stop Risky Boots' newest plot. Mimic reveals to Shantae that three magic seals, hidden away, are necessary to release the lamp's magic, and Shantae sets out to find them. With help from her friend, the zombie Rottytops, she learns that the seals are in possession of three treasure hunters, the Barons of Sequin Land, whom she will have to confront to obtain the seals. While she pursues the Barons, Risky tricks Rottytops and her brothers into kidnapping Mimic for her, promising them a lifetime supply of brains and the coffee needed to maintain their sanity. Shantae, now in possession of the three seals, reaches them as Risky reveals her deception. Shantae surrenders the seals in exchange for Mimic's life. Risky then reveals to Shantae that the lamp has the power to capture genies and she sucks Shantae's magical half into it, unleashing it as the evil clone Nega-Shantae. Shantae manages to destroy her counterpart, and flees from Risky's hideout as it collapses. She reunites with her friends, who promise to help her defend Scuttle Town and adjust to her new life as a human. The Mayor, impressed by her commitment, re-hires her as the town's Guardian.

The WiiWare version, described as being "an ongoing experiment in 2D on the Wii", as well as work on a Nintendo DS version and the scrapped Game Boy Advance sequel were all revealed in a May 2008 WayForward newsletter.

On September 15, 2009, Shantae: Risky's Revenge was revealed as a downloadable DSiWare title on Nintendo of America's 2009 Holiday lineup, with a tentative 2009 Q4 release date. Details on the 3-part episodic sequels were revealed in the November 2009 issue of Nintendo Power. It was later scheduled for a Q1 2010 release. In late September WayForward sent an email to all members of the Shantae Fan Club, officially stating that the game would be available in North America on October 4, 2010 and in an official press release, it was stated that Risky's Revenge would ditch its original episodic content plan and release the full game altogether for the price of 1200 Nintendo Points.

Shantae: Risky's Revenge has been well received by critics, with many reviewers saying that it is the best DSiWare available, achieving 85/100 on Metacritic and an 86% on Gamerankings. Critics praised the game for its beautiful visuals, excellent soundtrack, and an old school style that felt familiar to Castlevania and Metroid, but with fresh new ideas. One common complaint was aimed at the map system, which was viewed as poor. IGN called it a "labor of love, a sequel that doesn't disappoint". IGN later gave Risky's Revenge the Best Visuals Award and Best DS Game for 2010. The iOS version has been generally well received, though not as well as the DSi version, with a Metacritic score of 75/100 based on seven reviews.