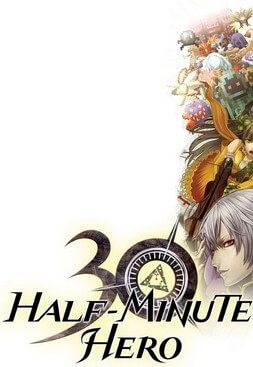 Half-Minute Hero's single player mode features 6 different game modes. Each mode is based on one part of a larger story, and as such, the last three modes are not available until the player has completed the first three modes; these last three modes are then unlocked in order after completing the previous mode. Each mode centers around a mechanic based on a limited amount of time (normally 30 seconds as implied by the game's title) to complete that part of the game.

Half-Minute Hero was originally a downloadable freeware game called "30-Second Hero", whose concept was adopted by the producer for a PSP title. It was designed to be a quirky adaptation of the traditional, lengthy role-playing video game formula into 30 second intervals. The 8-bit graphics were designed to appear "old-school", resembling 8-bit RPGs such as early Dragon Quest and Final Fantasy games, and make the player use their imagination.