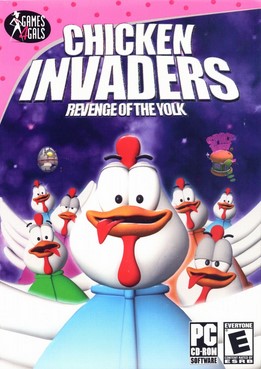 Chicken Invaders: Revenge of the Yolk (or Chicken Invaders 3) is the third game in the series, released in 2006. It is similar to the second version (with up to 4 player cooperative play). It has 120 waves, in 10 levels across 12 systems in the galaxy. There are 30 bonuses. Weapons have 11 power levels, and a secret 12th level, which can only be reached by acquiring an additional 10 powerups after the 10th level powerup (the 20th). There are also seven unlockables which are unlocked after repeatedly completing the entire game. The game also has in a Christmas Edition and an Easter Edition.

(1) Comments on "Chicken Invaders: Revenge of the Yolk Full Version"