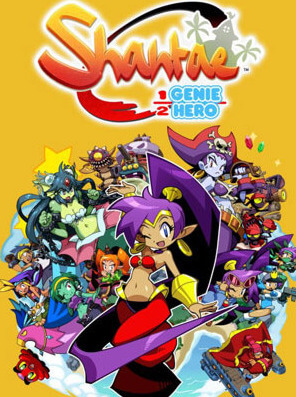 The game was funded via Kickstarter, and although the campaign ended in October 2013, WayForward still accepted donations via PayPal on its website up to December 2014, raising over $900,000 USD.

Like the previous installments of the series, the player takes control of Shantae, a half-genie who can use her hair as a whip to attack enemies. Throughout the game, Shantae can obtain dances that allow her to transform into various forms, each with their own abilities that can access otherwise inaccessible areas. Along with returning transformations, such as the monkey and elephant, new forms include a bat that can cross long gaps, a crab that can maneuver underwater, and a mouse that can crawl into small mazes. These transformations can be further upgraded with new abilities. Unlike past Shantae titles, which featured connected world maps that could be freely explored, Half-Genie Hero is divided up into several action stages, which can be replayed to obtain new items that become accessible with the use of certain powers, some of which are required to progress through the story. The magic meter system from Risky's Revenge returns, which allows Shantae to use unlocked spells at will instead of purchasing them individually. Completing the game unlocks "Hero Mode", which gives Shantae access to several of her transformations from the beginning of the game in order to facilitate speedruns. An additional "Hard Core Mode", featuring more difficult enemies, was later added via a free update. Upon finishing any of the game's campaigns, the player is rewarded with bonus artwork based on their final time and completion percentage. This artwork can be viewed via an in-game gallery, which also features several pieces of fan art by higher-tier Kickstarter backers. The game is presented in high definition, with 2D vector character sprites on 3D environments, unlike previous entries' dedicated pixel art aesthetic.

Late one night, the half-genie Shantae is awoken by the sound of a voice. Following it outside, she discovers a secret cave, where a messenger from the Genie Realm warns her of an impending evil that only she can defeat, but disappears before it can elaborate further. Shantae suddenly awakens, revealing the experience to have been a dream. She goes to visit her Uncle Mimic, who is working on a new invention, the Dynamo, which will keep Scuttle Town constantly powered and safe from attack. However, the pirate Risky Boots begins a siege on Scuttle Town, with one of her Tinkerbat minions stealing Mimic's blueprints. Shantae gives chase and defeats Risky, retrieving the blueprints, but Mayor Scuttlebutt once again fires her from her position as the town's guardian genie due to Risky's escape and the damage incurred. Mimic reveals that several components are still needed to complete the Dynamo, so Shantae begins searching across Sequin Land for the remaining components, helping those she finds in need of assistance along the way.

With help from her friends Sky, Bolo and Rottytops, Shantae retrieves all of the components needed to finish the Dynamo. Mimic switches the device on, but the Dynamo goes haywire and blasts Shantae with dark magic, turning her to her Nega-Shantae form. Risky appears and reveals she had swapped Mimic's blueprints with her own, and that she plans to power up the machine and use it to invert the magical polarity of the entire Genie Realm, turning them evil. Shantae attacks the group while Risky escapes with the Dynamo in tow, but Shantae's friends manage to snap her out of her trance, returning her to normal. To prevent Risky's plan, Mimic creates a Magical Polarizer to reverse the Dynamo's effects, and Shantae sets out for Risky's hideout. Upon arrival, Shantae defeats Risky and the Dynamo-powered Tinkerbrain, but the messenger from her dream pulls her into the Genie Realm and reveals their magic has already been corrupted. With no choice left, Shantae decides she must destroy the Genie Realm to keep the world safe and destroys the repowered Tinkerbrain, returning to the real world and escaping the exploding hideout as Risky swears vengeance.

Shantae reunites with her friends at her lighthouse, where Mayor Scuttlebutt announces Shantae is rehired as Scuttle Town's guardian genie. As the others depart, Shantae expresses regret for having to destroy the Genie Realm, but the messenger appears and reveals that Mimic's Magical Polarizer worked, purifying their magic and saving the Realm. The messenger also explains that Shantae's mother is alive and well in the Genie Realm, having given up Shantae as a child to keep her safe while devoting her own life to protecting the real world from greater threats. Finally understanding her mother's sacrifice, Shantae leaves to celebrate with her friends as the messenger returns to the Genie Realm. If Shantae defeats the Tinkerbrain without acquiring the Magical Polarizer, an alternate ending occurs where Shantae accidentally destroys the Genie Realm, consequently losing all of her genie powers and abilities.

Additional DLC story campaigns retell the events of the game's final act from the perspective of other characters. In Pirate Queen's Quest, Risky Boots gives an exaggerated explanation of her actions after stealing the Dynamo, collecting components to strengthen the machine and Genie Crystals to open the way to the Genie Realm. In Friends to the End, after Shantae is transformed into Nega-Shantae by the Dynamo, she is knocked out and a portal is created from the excess dark magic. Sky, Bolo and Rottytops enter the portal, which takes them into the Nightmare Realm formed from Shantae's now-corrupted memories, and the three must work together to reach the true Shantae within and restore her to normal. The Costume Pack DLC and a post-launch update add four non-canon "what-if" storylines, in which Shantae undergoes ninjitsu training, seeks out the perfect beach spot, hosts a slumber party, and becomes a cybernetic peace officer from Mighty Switch Force.