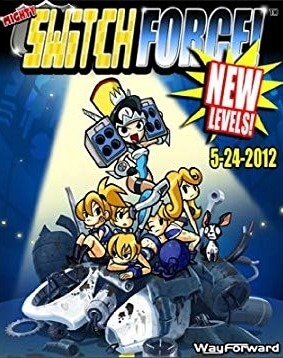 A group of convicts called the "Hooligan Sisters" escape custody on Planet Land. As they escape, one of them breaks open a canister, which causes Planet Land to become infested with monsters. The "Galactic Penal Squad" contact "cybernetic peace officer" Patricia Wagon (voiced by Stephanie Komure), authorizing the use of her Siren Helmet and Pellet Shooter, in order to capture the criminals. Helping her along the way are General Gendarmor, a mechanical armor that can extract her from battles, Ugly Twitching Dog (U.T.D), who can create reload points, and HQ, who are monitoring her actions.

The player controls a cyborg police officer named Patricia Wagon, who has to round up a group of escaped female convicts. The goal of each level is to find all the escaped convicts and return to the exit point as quickly as possible, with each level possessing a Par Time that dedicated speed runners can try and beat. Along with the ability to jump and shoot, Patricia has the ability to push in and out blocks dotted around the stage with her "Siren Helmet", using them as platforms or a means to destroy certain enemies. There are also various other types of blocks such as launcher blocks that send Patricia or an enemy in a certain direction and colored blocks that allow the player to change which plane they switch on. During each level, the player has three hearts (called her "Heart Drive", in universe), with the player losing one heart if Patricia is hurt by an enemy, comes into contact with spikes or is pushed into the screen by a block change (Checkpoints created allow Patricia to respawn at that point in the case of the latter two). If Patricia loses all three hearts, she will have to start the level over. Throughout the level she can collect floppy disks which restore hearts, either by finding them, or from shooting enemies.

The game was released for the Nintendo eShop on December 22, 2011. A free update to the game was released on May 24, 2012, featuring five new levels, improved 3D effect and the option to restart the level. On July 3, 2012, WayForward announced development of Mighty Switch Force! Hyper Drive Edition as a downloadable title for the Wii U. The game features redrawn graphics similar in style to A Boy and His Blob, and also features off-screen game play with the Wii U GamePad, as well as the downloadable content from the Nintendo 3DS update. New to this version of the game is also the inclusion of Hyper Mode levels, which remaster all previous levels making them even harder. The game was released in conjunction with Wii U's American launch November 18, 2012. In Europe, the game was released December 6, 2012.