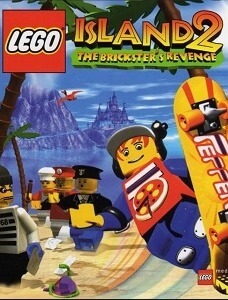 Lego Island 2: The Brickster's Revenge is an action-adventure video game developed by Silicon Dreams Studio and published by Lego Software. It is the sequel to Lego Island and was followed by Island Xtreme Stunts.

Activities in the game include riding skateboards, scubadiving, flying planes, and riding pterodactyls. The player must deliver pizzas to complete the first stage of the game, additionally, he or she can engage in non-compulsory activities, such as skateboarding at the skatepark and exploring the island. To complete a further stage of the game, the player must also help find the missing pieces from the Informaniac's Constructopedia, which have been scattered around the island by the Brickster. The player must also defeat the Dark Knight in a jousting tournament and dive underwater to retrieve bricks on Castle Island.

Lego Island 2: The Brickster's Revenge received fair scores. IGN gave the Game Boy Color version a score of 5 out of 10, calling it "mediocre" and "strictly average."

In 2002, Lego Interactive and Electronic Arts released Island Xtreme Stunts for Microsoft Windows, PlayStation 2, and Game Boy Advance, with Silicon Dreams Studio returning as the developer. The game was a tie-in to a Lego theme of the same name, which lasted only a year.