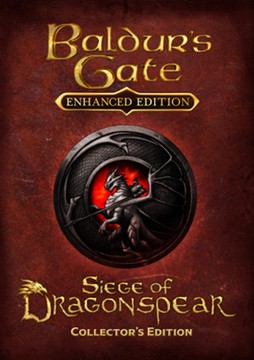 Baldur's Gate: Siege of Dragonspear is an expansion pack for the role-playing video game Baldur's Gate: Enhanced Edition developed and published by Beamdog.

The expansion represents the first new original content to Baldur's Gate series released after more than 15 years, and its plot takes place between the events of Baldur's Gate and Baldur's Gate II: Shadows of Amn. Gameplay remained similar to Baldur's Gate: Enhanced Edition, although a class, companions and areas have been added.

Siege of Dragonspear was generally well received by video game publications who appreciated the return into Forgotten Realms after years and judged Beamdog's work as fun and successful. It received transphobic backlash from certain consumers who criticized the introduction of a trans woman among the game's non-playable characters.

The game takes place shortly after the conclusion of Baldur's Gate and centers on a mysterious crusade to the north of Baldur's Gate city, led by a warrior named Caelar Argent who is known as the Shining Lady.

The story begins several weeks after Sarevok's death with the player character's party hunting the remains of Sarevok's forces in the sewers and catacombs of the city. Shortly after, word arrives in the city of Caelar Argent's crusade, warning that she is making her way down along the Sword Coast and threatening the city. The player is sent with a contingent of Flaming Fist soldiers (sent by Duke Eltan) to halt Argent's advance at Dragonspear Castle. The company is joined by forces from several other major cities of the Coast who are also threatened by Argent's crusade. Throughout the journey, the player is visited by a hooded man who teaches the player more about his heritage and how to use it.

The main river crossing is destroyed by Caelar's forces, and the coalition is forced to cross at the last standing bridge along the river where Bhaal, the player's father, had been killed by the mad god Cyric years earlier. After driving Argent's forces back, the player suffers a vision of Bhaal's death and burns his symbol into the bridge, lowering the morale of the coalition soldiers. The player's party must sneak into Dragonspear Castle and learn what they can about Argent and gather intel on her forces. Inside the castle, the player discovers Argent's chief lieutenant communicating with an unknown source before they are discovered and forced to leave the castle without gathering any information.

The coalition attacks Dragonspear castle after successfully repelling an attack from Caelar's army, and destroys most of her forces. Caelar is trapped in the keep, so she has her chief lieutenant Hephernaan cast a paralysis spell over the whole keep. However, his spell traps Caelar as well and his true intentions are revealed: he planned to use the Bhaalspawn's blood to open the portal to the Nine Hells to unleash his master and his army upon the Material Plane. Caelar and her surviving men, along with the player and their party, travel into the portal to stop Hephernaan. It is revealed that Hephernaan's master is Belhifet, a demon who was cast into the Nine Hells as punishment one hundred years prior. After defeating him and Hephernaan, Argent reveals that her true intention was to free her uncle from the Nine Hells and all the death that has occurred has been in pursuit of retrieving him. Caelar stays behind to seal the portal, trapping herself in the Nine Hells forever as punishment for her actions.

The player returns to the Material Plane and the coalition celebrates Caelar's defeat at Dragonspear. Later that night, the player suffers a nightmare of an avatar of Bhaal attacking him. It is revealed that the "avatar" was Skie Silvershield, a companion from the first game and the only child of Grand Duke Entar Silvershield, one of the dukes of Baldur's Gate. The player is arrested and dragged back to the city in irons. Many call for the player to be executed, but Grand Duke Belt informs the player that he will be smuggled out of the city in order to avoid execution as a reward for all the service that he has done for the city. After escaping the city, the player is met by Imoen, Minsc, Dynaheir, Khalid, and Jaheira, who promise to always travel with the player. Shortly after, they are ambushed by unseen figures, setting up the beginning of Baldur's Gate II: Shadows of Amn. It is also revealed that the hooded man is Jon Irenicus, the villain of the second game.

Siege of Dragonspear was announced on July 10, 2015 during a live event hosted by Beamdog as a bridge between the events of Baldur's Gate and Baldur's Gate II: Shadows of Amn. Trent Oster, game director and co-founder of Beamdog, described the development of the game as: "We move from custodian to creator", and the intention of the expansion was to rival to Baldur's Gate: Tales of the Sword Coast and Baldur's Gate II: Throne of Bhaal expansions. Oster said that Siege of Dragonspear would be bigger than the two previous expansions combined, taking the player occupied for at least 25 hours of play across 70 new areas and that would introduce a new monster summoning class called "The Shaman", and would add 4 new companions to complement the original roster of characters that can be imported from Baldur's Gate: Enhanced Edition. In addition, Oster stated that there would be several improvements to the UI including the addition of health bars and journal pop-up entries.