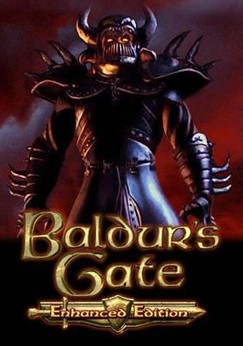 Baldur's Gate is a fantasy role-playing video game developed by BioWare and published in 1998 by Interplay Entertainment. It is the first game in the Baldur's Gate series and takes place in the Forgotten Realms, a high fantasy campaign setting, using a modified version of the Advanced Dungeons & Dragons (AD&D) 2nd edition rules. It was the first game to use the Infinity Engine for its graphics, with Interplay using the engine for other Forgotten Realms-licensed games, including the Icewind Dale series, as well as other licensed D&D campaign worlds such as Planescape: Torment. The game's story focuses on players controlling a protagonist of their own creation who finds themselves travelling across the Sword Coast alongside a party of companions, to unravel the mystery surrounding a sudden iron crisis affecting the region and attempting to discover the culprits behind it, while uncovering dark secrets about their origins and dealing with attempts on their life.

The game received critical acclaim following its release and was credited for revitalising computer role-playing games. Its success led to an expansion pack entitled Tales of the Sword Coast, as well as spawning a sequel entitled Baldur's Gate II: Shadows of Amn, which later received its own expansion called Throne of Bhaal. An enhanced version of the Infinity Engine was later created as part of Beamdog's remake, entitled Baldur's Gate: Enhanced Edition, the first new release in the franchise in nearly nine years.

Players conduct the game from a top-down isometric third-person perspective, creating a character for each playthrough who then travels across pre-rendered locations, taking on quests, recruiting companions to aid them, and combating enemies, while working towards completing the game's main story. Control is done through a user interface that allows a player to move characters and give them actions to undertake, review information on on-going quests and the statistics of characters in their party, manage their inventories, organize the formation of the party, though the screen does not need to be centered on the characters being controlled and can be moved around with the mouse and keyboard, the latter also capable of accessing various player options through keyboard shortcuts.

All of the gameplay mechanics were coded to conform to the Advanced Dungeons & Dragons 2nd edition role-playing rules, with game automatically computing the rule intricacies, including tracking statistics and dice rolling. Although the game is conducted in real-time, some elements of the ruleset used in the coding were modified to allow it to feature a pausable real-time mode, allowing players to pause the game at any time and prepare what actions a character do, including the ability to set the game to automatically pause at preset points in combat. A new playthrough requires the player to either create a new player character (PC), or import one they exported from a previous playthrough. Every new character requires the player to determine what their name, gender, race, class, and alignment are, and what ability scores and weapon proficiencies they have, with thieves requiring points be allocated between their thieving skills, and spellcasters having a few spells set up for them - those using priest spells have them available for use from the start, while those using wizard spells add them to their spellbook and have one primed for use at the start of a new game. New PCs can be multi-class, but must adhere to the restrictions that come from this, in accordance to the 2nd edition rules; a character who is both a cleric and a fighter, may only use weapons of the former class.

The game's main story is divided up into eight parts - a prologue and seven chapters - with each requiring the player to complete a specific task in order to complete it; while free exploration of the game's world map is allowed from the outset upon completing the prologue, some areas are not accessible until the player has advanced to a specific chapter. With the exception of imported characters, all PCs begin off as weak characters from the start, but eventually grow stronger as the player explores the game's world, completing both the major quests and the game's large variety of side quests, killing hostile enemies, earning experience points to level up their character, finding new spells to use and new pieces of equipment to wear, and recruiting a variety of companions, each with different classes and skills, to aid them in their travels. A PC may have up to five companions travelling with them in their party, with the player free to decide who to recruit and who to dismiss from the party. Upon reaching the experience threshold for their current level, defined by their class, both the PC and companions can level up, increasing their hits and occasionally improving their weapon proficiencies, with thieves provided additional points to distribute between their skills, and spellcasters gaining access to additional spell slots, sometimes gaining access to new ones for higher levels of magic. All characters are limited to a maximum number of 89,000 experience points in the game, with characters who multi-class being also affected by this cap - an elf who uses two classes may only earn half the cap in each, with experience divided equally between the two classes, while a human who dual-classed after earning a third of the cap in their base class, may only earn the other two thirds in their second class.