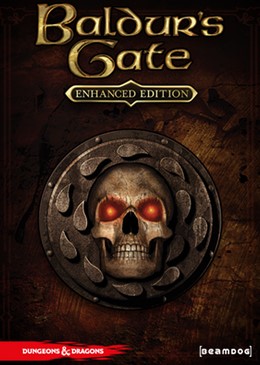 Baldur's Gate: Enhanced Edition is a remake of the role-playing video game Baldur's Gate, developed by Overhaul Games, a division of Beamdog, and published by Atari. It was released for Microsoft Windows on November 28, 2012, with additional releases between December 2012 and November 2014, for iPad, OS X, Android and Linux. The remake combines the original game, Baldur's Gate, with its expansion Baldur's Gate: Tales of the Sword Coast, retaining all of the original elements from both (story, in-game locations, gameplay and characters), while including new additions, a new separate arena adventure entitled The Black Pits, and a number of improvements to the game, some of which were imported from Baldur's Gate II: Shadows of Amn.

On March 31, 2016, an expansion was released for the remake entitled Baldur's Gate: Siege of Dragonspear, which focuses on the events following the conclusion of Baldur's Gate, that lead up to Baldur's Gate II: Shadows of Amn.

Much like the original game, Baldur's Gate: Enhanced Edition follows the rules of the 2nd Edition Advanced Dungeons & Dragons, licensed by Wizards of the Coast. and features both single player and multiplayer modes, while much of the gameplay, such as moving between locations, the "paper doll" equipment system, and inventory management, remains the same as the original game.

With the Enhanced Edition comes a number of new features, as Beamdog stated that the Overhaul team had added several hundred improvements to the original game. New features created for the remake (as of Version 2.3.6), include cross-platform functionality for the multiplayer mode, allowing players on different platforms to be able to play with each other, the addition of a new stand-alone arena adventure entitled The Black Pits, in which players form a party of six adventurers and battle against increasingly difficult opponents, the addition of four new characters, each having their own dialogue and some having their own associated adventures, with bonus quest enemies that have been added to the game described as posing a "more vigorous challenge", four new class kits - the Dwarven Defender, Shadowdancer, Dragon Disciple, Dark Moon Monk and Sun Soul Monk kits - a few new locations added to the game, an achievement system (for Steam versions of the game only), and two new difficulty modes - Story Mode, and Legacy of Bhaal.

Story Mode is an enhanced version of Easy difficulty, in which all characters in the party cannot die, have a strength stat of 25 (regardless of the actual value) and are immune to most negative effects, while all enemies can be damaged and killed easily. Legacy of Bhaal, in contrast, is an enhanced version of Insane difficulty, with enemies having even more hit points, saving throws, THACO and attacks per round, while the difficulty cannot be changed once implemented by the player.

Some of the major improvements to the original game that are incorporated into the remake (also as of Version 2.3.6), include a revamped user interface, the ability to play at higher resolutions as well as different viewing modes including widescreen, increased flexibility to mod the game, a new renderer, multiplayer matchmaking abilities (at the time of launch, this function was in a beta state), updates to the map and journal system, the level cap for the remake being raised, and the importation of improvements and some elements from both Baldur's Gate II: Shadows of Amn and its expansion pack, including classes, subraces and class kits, that were not available in the original game; a later patch (1.0.2014) the romance element from Baldur's Gate II is also incorporated, but only the new characters have this implemented. The developers also included an auto-update function to the game, with further modifications made to the remake based on suggestions made by users.