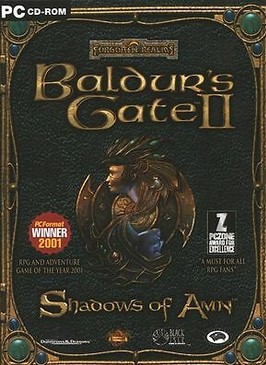 Baldur's Gate II: Shadows of Amn is a role-playing video game developed by BioWare and published by Interplay Entertainment. It is the sequel to Baldur's Gate (1998) and was released for Microsoft Windows in September 2000. Like Baldur's Gate, the game takes place in the Forgotten Realms—a fantasy campaign setting—and is based on the Advanced Dungeons & Dragons 2nd edition rules. Powered by BioWare's Infinity Engine, Baldur's Gate II uses an isometric perspective and pausable real-time gameplay. The player controls a party of up to six characters, one of whom is the player-created protagonist, while the others are certain characters recruited from the game world.

Set in the fictional Forgotten Realms, much of Baldur's Gate II takes place in and around Athkatla, a city in the country of Amn. Opening shortly after the events of Baldur's Gate, the game continues the story of the protagonist, Gorion's Ward, whose unique heritage has now gained him or her the attention of Jon Irenicus, a powerful and sinister mage. The storyline revolves around the machinations of Irenicus and the player's encounters with him.

Development began in January 1999. BioWare set out to improve upon the first Baldur's Gate in every way possible. From a list of constructive criticism—compiled from the suggestions of fans, reviews, and internal suggestions—a list of features to be added to the game was distilled: some of these were 800 x 600 resolution, 3D support, and character kits. In Baldur's Gate, the game's engine and content were being developed at the same time; whereas in Baldur's Gate II, the engine was running from the start. Having a completed engine meant they could direct their efforts towards producing content, instead of focusing on basic functionality.

Shadows of Amn received critical acclaim, being praised for its gameplay, artwork, and voice acting, and is often noted as one of the greatest role-playing games of all time. GameSpy, GameSpot, and IGN awarded it their "Role-Playing Game of the Year" awards for 2000, and the game has sold more than two million units. An expansion pack, Baldur's Gate II: Throne of Bhaal, was released in 2001. Besides adding a large dungeon and enhancements to the game, this well-received expansion concluded the Child of Bhaal saga. Shadows of Amn and Throne of Bhaal have also been included together in various compilations. In 2013, an enhanced version of Baldur's Gate II was released, bearing the title Baldur's Gate II: Enhanced Edition and using an updated version of the Infinity Engine.

Baldur's Gate II: Shadows of Amn is an Advanced Dungeons & Dragons 2nd edition computer role-playing game. The central quest of the game consists of about 50 to 60 hours of play, while the full game, including all side quests, is estimated to be between 200 and 300 hours. The player controls a party of up to six characters, one of whom is the protagonist; if the protagonist dies, a saved-game must be loaded, or a new game begun. The game begins with character creation, where, through a series of configuration screens, the player creates a player character protagonist, choosing such things as class, ability scores, appearance, and alignment. Alternatively, an existing character from Baldur's Gate or Tales of the Sword Coast (the Baldur's Gate expansion) can be imported. Once in the game world, the player may recruit certain non-player characters (NPCs) to travel with him or her, though only five may do so at a time; and, depending on who is present in the group, bickering, romance, and side quests can result. NPCs in the party often converse with the player or with one another, and at times interject into the player's conversations with others.

The game is played from an isometric perspective, and the screen, which does not need to remain centered on the protagonist, can be scrolled with the mouse or keyboard. Areas are revealed as they are explored by the player's characters. A fog of war effect hides explored areas when the player's characters move away from them. The player can also change the formation in which the party moves. Clicking an area exit, such as a doorway or staircase, causes another area to be loaded. Clicking on the edge of an outside area causes the party to travel there; the game then presents the player with the World Map, from which the player may select a destination.

The player interacts with characters and objects by clicking on them. Clicking on the ground causes the player's selected characters to move. The gameplay, though in real-time, can be paused, whereupon commands may be issued to controllable characters, who will attempt to execute them when the game is unpaused. The game can also be set to pause automatically at certain times. Dialogue is started by NPCs at certain scripted times, or by the player's clicking on NPCs who are not immediately hostile. When speaking to an NPC, the player must often choose what to say from a list of responses. The dialogue may lead to quests or important information. When the player clicks on a hostile being, the currently selected characters will advance to attack it. Information about characters, creatures, items, and buildings in the game environment is shown on a tool tip, which appears when the mouse pointer is held over game elements.