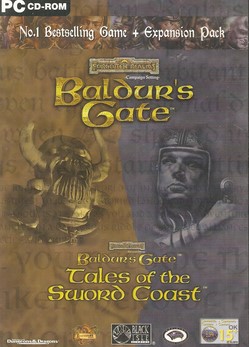 Baldur's Gate: Tales of the Sword Coast is an expansion pack of the fantasy role-playing video game Baldur's Gate. Developed by BioWare and published by Interplay in April 1999, it adds 20 to 30 extra hours of gameplay to the original game, including the addition of four new areas and minor tweaks to some of the mechanics. The expansion consists of four notable quests that take place within the same game world as Baldur's Gate, and sees players taking their character (referred to as the Ward) and their party of companions across the Sword Coast, from travelling to a distant island, to exploring the fortress dungeon of a former dwarf. Tales of the Sword Coast achieved global sales of 600,000 units by 2003.

While the expansion retains the same fundamental gameplay mechanics of Baldur's Gate, and the new areas incorporated into the same world map as the original game, a number of tweaks and improvements were made. These include:

In addition, if the player had completed the original game, the expansion features the option of loading a save game of their player character and their party, placing them within the new settlement of Ulgoth's Beard, where most of the quests begin.

Baldur's Gate: Tales of the Sword Coast takes place around the same time of the original game, and within the same region of Faerûn. The expansion adds a number of new locations, including the small town Ulgoth's Beard, a mysterious island in the Trackless Sea, the Isle of Ice, and the ruins of Durlag's Tower. While it provides additional side quests, these do not impact the original game's main story, especially if it is ongoing.

Travelling to Ulgoth's Beard, a small town with great adventuring possibilities, a party of adventurers consisting of Gorion's Ward and their companions, meet with a mysterious mage called Shandalar who asks them to recover a cloak of his from the Isle of Ice, before forcefully teleporting them to the island. The Ward's party soon find themselves fighting against those who were trapped on the island's dungeon, eventually recovering the cloak and managing to return with it.

Heading to the town's docks, the party encounters Mendas, a strange man who seeks help for an expedition to track down the ship used by Balduran. After returning with a sea chart that had been found by a local guild in Baldur's Gate, the party travel across the Trackless Sea, only for a storm to shipwreck them on an island. Discovering a village of people living there, the Ward's party learn from the village's chief that they suffer from werewolf attacks, to which the party agree to help deal with them, learning that the creatures reside in the wreck of Balduran's ship. Venturing towards it, the group encounter an elven mage residing in a cave, who reveals the truth behind the incident aboard Baldruan's ship, and that the villagers are not what they seem to be. Defeating what turns out to be wolfweres, the party returns to the village to find that all the villagers were actually werewolves, forcing them to fight through them, including a Loup Garou, in order to escape the island. Returning to Ulgoth's Beard, the group soon learns that Mendas is a werewolf and had sent them out to help him bring back the village chief, his mate, along with the villagers, in order for them to roam free across the Sword Coast. Upon learning of what the Ward did, Mendas transforms into a Loup Garou and attacks the party, but is ultimately