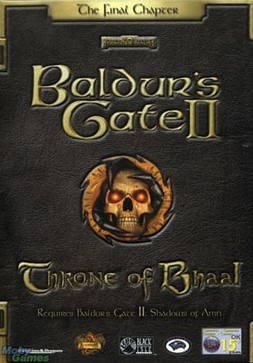 Baldur's Gate II: Throne of Bhaal is the expansion pack for the role-playing video game Baldur's Gate II: Shadows of Amn, and is the final chapter in the Baldur's Gate series. It adds a multi-level dungeon called Watcher's Keep to the game and completes the main plot. There are several new weapons, a higher level cap, a further refined Infinity graphics engine, and new class-related features and magical skills. The novelization of the game was written by Drew Karpyshyn and released in September 2001.

The gameplay is similar to previous entries in the Baldur's Gate series, with the player controlling a party of up to six characters, including the protagonist, who can be custom designed at the beginning of the game. The player can also import their character from either Baldur's Gate or Baldur's Gate II: Shadows of Amn.

The in-game plot is based on a war that breaks out in Tethyr amongst the Bhaalspawn. The player character (PC) must venture through regions including the city of Saradush, which is under siege by fire giants, a fortress in the Underdark, and a monastery in Amkethran. Through the game, the PC has to defeat five legendary Bhaalspawn, known as The Five.

As the story progresses, The Five kill all their brethren, despite the efforts of Mellisan, a woman trying to save all the innocent Bhaalspawn and keep them safe in Saradush. Only when the PC kills off The Five and uncovers his own power is the truth revealed: Mellisan is in fact Amelyssan the Blackhearted, the mastermind behind both The Five and the slaughterer of all the Bhaalspawn. She was once Bhaal's high priestess, to whom he entrusted the task of his resurrection. She does not intend to resurrect the god, however. Instead, she is preparing to become the Goddess of Murder herself.

With all quests finished and all Bhaalspawn killed, the PC must journey to the planar Throne of Bhaal for the great final battle against Amelyssan. Ultimately, the PC is presented with the choice of either ascending the throne of Bhaal or destroying it and returning to peaceful life as a mortal. If the PC chooses to ascend, they have the option of either becoming the new God of Murder or becoming a deity dedicated to good and righteousness.