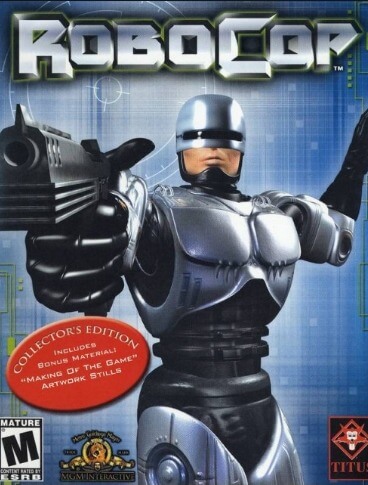 RoboCop is a first-person shooter video game based on the RoboCop films. It was developed and published by French company Titus Interactive, which acquired the rights to a RoboCop video game in 1999. After several schedule changes, the game was released in 2003 for Microsoft Windows, PlayStation 2, and Xbox, with the European versions distributed through Avalon Interactive. A GameCube version was released in Japan in 2004, under the title RoboCop: Aratanaru Kiki (English: RoboCop: New Crisis). According to Metacritic, the Xbox version received "unfavorable" reviews.

RoboCop is a first-person shooter based on the RoboCop films. In the game, RoboCop, a cyborg police officer in Neo Detroit, is tasked with finding the people responsible for the spread of a new designer drug known as Brain Drain. Simultaneously, RoboCop is tasked with investigating connections between a mayoral candidate, Omni Consumer Products (the creator of RoboCop), and Brain Drain.

The game features nine large levels, each one divided into several sections. The player's progress is saved after the completion of each level. If the player is killed, then the level is restarted from the beginning. Each level consists of one primary objective and several secondary and bonus objectives. The player must complete the primary objective to advance through the game, while the other objectives add to the player's final score. RoboCop can use several weapons against enemies, including a pistol, a machine gun, a grenade launcher, and a missile launcher. RoboCop can also rescue civilians being held as hostages and can arrest enemies who surrender.

In June 1999, it was announced that French company Titus Software had acquired the rights for a RoboCop video game, with a release expected for late 2000. The license included the rights to develop it on all gaming systems, including Dreamcast, Nintendo 64, PlayStation, and PlayStation 2 (PS2). Xatrix was expected to develop the game, which would be a first-person shooter. By April 2001, Infogrames was brought on as the developer of a PS2 version, expected for release in November 2001. Titus Interactive Studio ultimately became the developer. By May 2002, the PS2 version remained in development and was known as RoboCop: The Future of Law Enforcement, with an expected release that October. The game would include an original story based on the RoboCop films.

In November 2002, Titus announced that the game would be released for the Xbox in February 2003. By the following month, the Xbox version had been scheduled for release in April 2003. For the United States, the PS2 version and a GameCube version were cancelled so Titus could focus on the Xbox version. In Germany, Titus published RoboCop for Microsoft Windows on April 25, 2003. Titus Software Corporation published the US Xbox version in July 2003. That month, the PS2 version was released in Japan, followed by a UK release. Titus later released a GameCube version in Japan on March 4, 2004, under the title RoboCop: Aratanaru Kiki (translated as RoboCop: New Crisis in English).

The Xbox version received "unfavorable" reviews according to the review aggregation website Metacritic. The Xbox game was particularly criticized for its lack of an in-level save option. The Swedish magazine Gamereactor called the Xbox version "the worst videogame since Superman 64" (also from Titus Software).

Alex Navarro of GameSpot criticized the sound and graphics, and stated that despite the game's lengthy development period, it "has a bevy of horrible problems that render the game practically unplayable." Navarro criticized the game's difficulty, slow player movements, a poor targeting system, poor controls, and the abundance of enemies, as well as the lack of objects to hide behind. Navarro further noted the limited amount of player ammo and the large amount of ammo needed to kill each enemy. Scott Alan Marriott of AllGame noted the "realistic, gritty environment that offers some limited interaction" and stated that "the look and feel" of the RoboCop films "are well captured." However, he criticized the slow cursor-based targeting system, stating that while it works in the RoboCop films "for dramatic effect", it "is downright dangerous in a game" with an abundance of enemy gunfire. Marriott also criticized the repetitive music and noted RoboCop's slow movements as being realistic to the films but frustrating to play.

Ben Lawrence of Official Xbox Magazine criticized the game as repetitive and frustrating, and noted the limited weapons and their ineffectiveness against enemies. Electronic Gaming Monthly criticized the Xbox version for its graphics, repetitive mission objectives, and poor artificial intelligence. Game Informer noted that the game included authentic elements from the films but that such details did not improve the gameplay, stating that the game "pretty much fails on every conceivable front and can't hold a candle to 99 percent of the games currently in the Xbox library." TeamXbox considered the game repetitive and its storyline "rather uninteresting," and noted that the graphics and sound were average. In Japan, Famitsu gave the PlayStation 2 version a score of 26 out of 40.