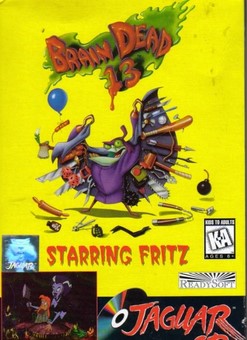 Brain Dead 13 is an Interactive movie game produced by Canadian studio ReadySoft that was released for MS-DOS in 1995 and later ported to consoles in 1996. Unlike Dragon's Lair and Space Ace, which began as laserdiscs, it was released for PCs and game consoles only.

Lance, a young computer expert, is called to fix a computer at a scary, dilapidated castle. After repairing a large super-computer, Lance learns that his client, the disembodied brain of Dr. Nero Neurosis, has a diabolical plan to take over the world. He quickly finds himself in trouble, being chased around the castle by Dr. Nero Neurosis's psychotic servant Fritz.

The player must guide Lance through the castle in order to defeat Dr. Neurosis and escape with his life.

The game consists entirely of quick time events. During gameplay exploration is freer than in most previous interactive games, with most rooms linked to crossroads. This leaves the route for finding the Brain Chamber up to the player.

Even crossroads are done as quick time events. Failure to choose a path as soon as he reaches a crossroads and to use the other actions as well as choosing the dangerous path results in the game displaying the failure scenes, in which Lance is killed by Fritz or by his other enemies or obstacles or he falls to his doom. The death scenes are often rather violent, but over-the-top in their cartoony approach. However, the player has infinite lives, and after the death sequence, there is a revival sequence, where Lance revives in ways that depend on which scene he was killed in.

The PC, Saturn, and Jaguar CD versions were compressed onto a single CD, and as a result have considerably lower video quality than the 3DO and PlayStation versions, which each include two CDs. The CD-i version, even though on single disc, uses DVC (digital video cartridge) for high quality MPEG compression and better video quality. The iOS port (which does not require any CDs) has higher video resolution than any of the six earlier versions.

The first disc of the 3DO version comes in two different releases: the original, which is labeled simply "Disc 1", and a version labeled "Disc 1 (v1.1)". The v1.1 disc fixes a bug which sometimes causes the game to crash during Vivi's funeral salon in the original release. The first run of the PlayStation version freezes during startup, making it completely unplayable; as with the 3DO Disc 1, it was succeeded by a working version of the game. The iOS port also upgraded from Version 1.0 to Version 1.1, which fixed various bugs, on December 1, 2010.