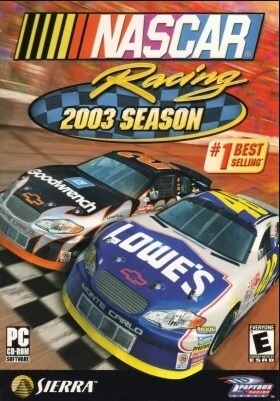 NASCAR Racing 2003 Season, or NR2003 for short, is a computer racing simulator released in February 2003 by Papyrus Design Group for PC and Mac OS X. The game was the last to be released by the company before EA Sports bought the NASCAR license exclusively from 2004 to 2009 (parent company Sierra's successor company, Activision Blizzard, reacquired NASCAR rights in 2011, with NASCAR The Game: 2011). The game included all of the 2003 NASCAR season tracks and many of the drivers.

At the end of March 2004, NR2003 was pulled from shelves when Electronic Arts acquired the exclusive NASCAR rights. In May 2004, Papyrus was shut down, and David Kaemmer bought the source code and assets a couple months later for his company FIRST, LLC where it became the base code for iRacing.com.

Despite being released in 2003, the sim is almost constantly being updated with new cars, tracks, and car models, as well as multiple forums and websites dedicated to the sim.