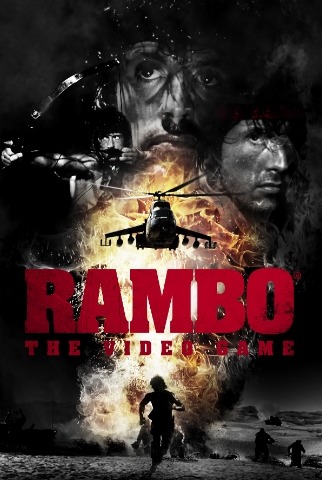 Rambo: The Video Game is an arcade rail shooter video game developed by Polish Studio Teyon and published by Reef Entertainment. The game is based on the Rambo franchise and puts the player in the role of John Rambo. From the basis for the gameplay Rambo journeys through scenes from each of the three films: First Blood (1982), Rambo: First Blood Part II (1985) and Rambo III (1988).

A teaser trailer was released by Machinima, containing montages from the films. The game was originally set to release in winter 2013, but was eventually delayed to early 2014. The game was critically panned by professional critics.

In the game, players assume the role of John Rambo as he plays out scenes from the first three Rambo films: First Blood, Rambo: First Blood Part II, and Rambo III. The mechanics of the game include stealth, demolition, and fighting off enemies using knives and guns using a cover system to avoid taking fire, and the player being moved through the environment by a rail shooter engine. The game also includes destructible terrain and ragdoll physics for animating characters.

Reef Entertainment acquired video game development and publishing rights in August 2011 to the Rambo film series from the rights holder StudioCanal. As of August 2011, the three Rambo series films had grossed over $600 million USD. The publisher said the purchase was fueled by the 2008 Rambo's success and by the then-scheduled release of the action film The Expendables 2, starring Sylvester Stallone. They stated that they planned to use the rights as a launching pad for the company. In August 2011 the publisher said a Rambo: The Video Game would be released at retailers in 2012 and would be available on the PlayStation 3, Xbox 360, and Microsoft Windows. Jeffrey Matulef of Eurogamer said on October 5, 2012, that he did not believe the game would see release before the end of the year. That same month Reef Entertainment said it would be out "soon". The Wii and Wii U versions had planned releases but they were cancelled.

Reef Entertainment's commercial director Craig Lewis describes the game as allowing players to "get under the skin of Rambo and wield his iconic weapon-set in battle." The developer used the actors from the film series to provide voices in the game for both John Rambo, played by Sylvester Stallone, and Col. Trautman, played by Richard Crenna. However, the developer did not actually hire the two actors to provide voice work (Crenna died in 2003) but instead contacted the owner of the film series, StudioCanal, and acquired copies of the original voice tapes for the series to use in-game.